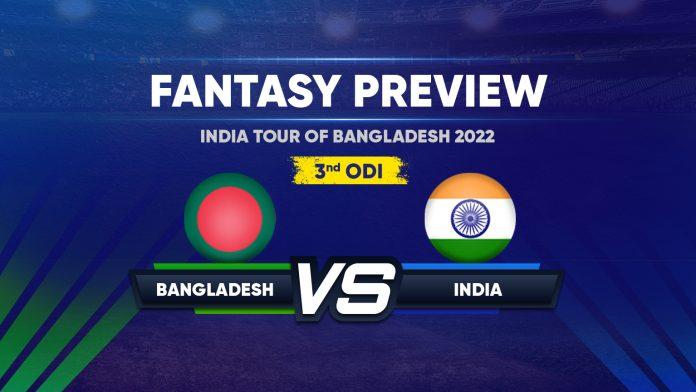 The highly anticipated 3rd and final ODI between India and Bangladesh is set to take place at the Sher-e-Bangla National Stadium on 10th December. Bangladesh has already taken an unassailable 2-0 lead in the series. India will be looking to bounce back and register their first win in the series, while Bangladesh will be aiming to seal a historical whitewash. Both teams will be looking to put in a strong performance and end the series on a high note. The match promises to be an exciting encounter between two cricketing nations. Let’s take a look at the fantasy preview for the match.

In the final ODI, Bangladesh will be looking to continue their winning streak and whitewash Men in Blue for the first time in its history. L. Das, the Bangladesh captain, will be hoping for another strong performance from his team. Players like S. Hasan, M. Hasan, and E. Hossain will be crucial in helping their team secure another victory. The Bangladesh bowling attack will also need to be on top form to contain the Indian batsmen who would be eager to make a comeback.

In the upcoming 3rd ODI, India will be looking to avoid a clean sweep at the hands of the hosts and end on a positive note. In the absence of R. Sharma, K.L. Rahul will captain the team, with key senior players V. Kohli and S. Dhawan acting as pillars of support. The Indian bowling attack has performed well in the series but needs to come out with a different strategy to dismiss the lower order of Bangladesh. I. Kishan and S. Ahmed are expected to replace R. Sharma and D. Chahar respectively.

Just like the previous matches, the 3rd and final ODI of the series will also be played at the Sher-e-Bangla National Stadium in Dhaka. The match is scheduled to start at 11:30 AM IST on 10th December 2022. The lineups will be out on MyTeam11 at 10:30 AM IST.

Historically, the Sher-e-Bangla cricket ground has been known for its favourable batting conditions. However, in this series, batters have struggled and spinners have taken advantage, claiming 15 wickets so far. On the other hand, fast bowlers have also been successful, with 20 wickets to their credit.

The weather on Saturday is predicted to be warm and dry, with a high of 28°C. The chance of precipitation is low, at only 10%, and the humidity will be moderate at around 50%. Overall, the conditions should be ideal for a cricket match.

M. Hasan (Bangladesh): Hasan has proven to be a jack of all trades for Bangladesh in this series. Hasan has been phenomenal so far, taking wickets, scoring a century and helping Bangladesh clutch victory from the jaws of defeat. He would be hoping to deliver another strong performance in the final ODI.

U. Malik (India): Despite his relative lack of experience, Malik has shown great potential and is one of the rising stars of Indian cricket. Malik tormented the likes of S. Al Hasan and M. Rahim with his express pace. After picking 2 wickets in the previous match, Malik will be looking to continue his good form and help India to succeed in the final match.

Hope the team preview was useful for you. It’s now time to join exciting cricket action on MyTeam11. Make fantasy teams in Bangladesh vs India 3rd ODI and you might win big cash prizes. MyTeam11 is now also available on the Play Store! So, stop waiting and START PLAYING!