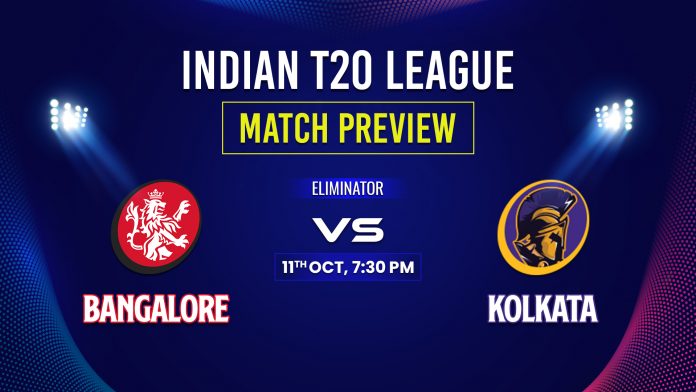 The eliminator round of the Indian T20 League will be played between Bangalore and Kolkata at Sharjah on Monday, the 11th of October. Despite Bangalore's desperate attempts at getting to either of the top two positions on the points table, Delhi and Chennai looked stronger than any other team in the league and hence finished in the qualifiers.

Bangalore will try their best to outwit the two time champions in the eliminator, as they had to suffer a huge loss the last time they met in Abu Dhabi in this season. Virat's dream of the maiden title is still three victories away, which seems like a great milestone for the skipper as the three teams are Kolkata, Delhi, and Chennai, the best teams this season. If Virat's boys manage to put an end to Kolkata's campaign, they might clear their second milestone as they have defeated Delhi both the times in the league matches.

The maximum and minimum temperatures of Sharjah will be 39 and 25 degrees, respectively. With no chances of precipitation, rain is not expected at all. The humidity will be around 26 percent.

Despite the last match was a high scoring one at Sharjah, the pitch is relatively slower this season. Bowlers will not get much help as swings are not expected in the initial overs, hence it would be a wise choice to bat first in this game. Batsmen will have an edge in the powerplay and the team winning the toss will most-likely bat first. Spinners will also have an advantage in the middle overs.