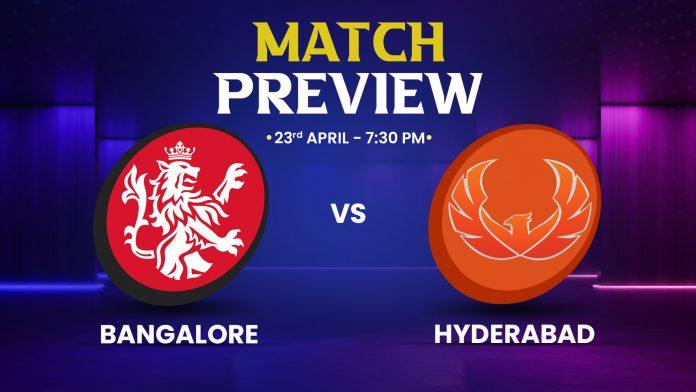 Bangalore and Hyderabad will be ready for their battle in the 36th match of the Indian T20 League 2022. The two teams have won their previous matches. Bangalore’s batting division is making news this season. Meanwhile, Hyderabad’s relentless bowling unit is taking wickets frequently in matches. Bangalore is in number 2 position and Hyderabad is at number 5 at the points table.

Bangalore has found its rhythm in the previous matches. Faf du Plessis’ team has found its rhythm with bat and the bowl. In the last match, Bangalore defeated Lucknow in a convincing fashion. Plessis hit 96 runs off 52 balls. However, the rest of the batting lineup did an underwhelming job with the bat.

Josh Hazlewood was the highlight in the bowling division as he took 4 wickets for the team. Harshal Patel also showed some grit and picked 2 wickets, which was a relief for the fans as his form is coming back.

Hyderabad currently has the longest winning streak in this season of Indian T20 League. With 4 wins in their bag, Hyderabad’s batting and bowling division is right on track. Abhishek Sharma has hit big runs for the team. In the last match, Sharma scored 31 runs alongside Rahul Tripathi, Aiden Markram and Nicholas Pooran.

T Natrajan is the highest wicket-taker of Hyderabad with 12 wickets. In the last match, Umran Malik grabbed 4 wickets for the team. Veteran Bhuvaneshwar Kumar sent 3 batters back to the dressing room.

The pitch at the Brabourne in recent matches has produced high-scoring performances in the Indian T20 League. Similarly, this match is also supposed to be a high-scoring encounter.

The weather for April 23rd is predicted to have clear skies. However, the dew factor will come into play in the later stages of the match.

Virat Kohli is a right-handed batter from Bangalore. The former captain of Bangalore is the all-time highest run-scorer of Indian T20 League. Recently, his performance with the bat has been mediocre. However, one cannot count Kohli out of a match and that is why he should be your top pick for the next match.

Dinesh Karthik is a right-hand batter and wicket keeper for Bangalore. The former Kolkata captain has been a valuable addition for the Bangalore franchise this year. In the last few years, Karthik delivered back-to-back jaw-dropping performances. Surely, his ability to hit the white bowl out of the park will come in handy for Bangalore’s next match.

Faf du Plessis is a right-handed batsman playing for Bangalore. Plessis is in tremendous form this season. So far, he has hit 250 runs with the highest score of 96 runs. His presence in the field has been crucial for the team as he elevates the standard of fielding on the ground.

T Natarajan is a Hyderabad-based left-handed batsman and left-arm medium-fast bowler. He has 12 wickets in this competition so far, and he has the potential to be much more productive here.

Kane Williamson is from Hyderabad and bats right-handed. So far, he’s scored over 120 runs in this tournament. He’ll also be a safe bet for this match.

Suggested Playing XI No.1 for Bangalore vs Hyderabad MyTeam11 Team:

Suggested Playing XI No.2 for Bangalore vs Hyderabad MyTeam11 Team: