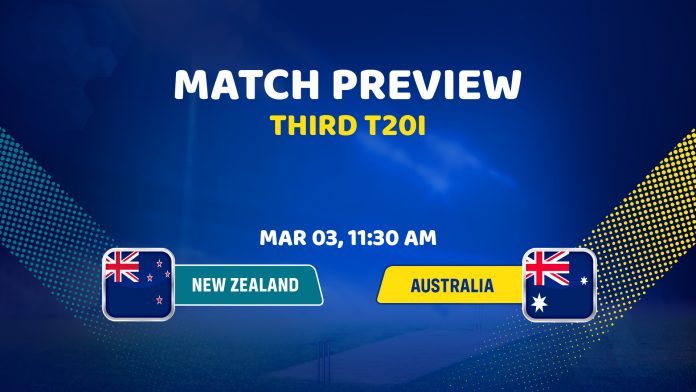 Australia will face mighty Kiwis in the third T20I to avoid another T20 series-loss. New Zealand have taken a 2-0 lead in the series.

After 5-days of the break, Australia and New Zealand reach Wellington to play the third T20I of the series. Kiwis have outplayed Aussies in the first two matches and are close to clinching the third T20 series win of the season. The last match was a high-scoring affair, but the late assault of Stoinis couldn’t cross the line for visitors, and they fall short of just 4 runs. Marcus Stoinis scored 37-balls 78, and Daniel Sams smashed 41 off just 15 balls to pull off another big chase. Australia allowed Kiwis to post a big total in Dunedin, and the top-order failed to provide a good start in the chase. Kangaroos were out of the contest when they lost six wickets on just 113, and they required 107 runs off the last 7 overs. The match went into the final over with 15 needed, but Neesham managed to defend it very well.

Australian skipper Finch is in terrible form, and he is still waiting for comeback innings. After a poor form in Indian T20 League, he failed to score in the home-summer. His outing for Melbourne in Australia T20 League was also a failed attempt. Finch scored 15 runs in this series, and he has to score big. Maxwell was also off the colors with managing runs in single-digit. Josh Philippe scored 45 off 32 in the last game, so it’s a good sign for Aussies. The bowling unit has also been so poor. In the first match, they offered New Zealand easy boundaries after picking three early wickets, and in the next game, Kiwis demolished the Aussie attack by posting 200 plus runs. They conceded 16 sixes and 10 fours in the match, and it’s more than 100 runs in a T20 match. Australia already lost to England and India in this format, and one more defeat will hurt their preparation for T20 World Cup 21.

Meanwhile, New Zealand are doing all the things right this home-summer. They beat West Indies and Pakistan comprehensively, riding on a young batch of players, followed by a number spot in Test rankings and WTC Finals qualification. Australia were hammered by Conway and Guptill in the first two matches. The last T20 gave Kiwis some headache when Stoinis and Sams added 92 runs off 37 balls, but they had the last laugh with four runs. Williamson scored 35-balls 53, and Neesham smashed 45 off just 16 balls after Guptill’s comeback knock. Guptill had poor numbers, and he hasn’t scored 100 runs in this whole summer, but in the last outing, he announced his comeback with a fine knock of 97 off 50 balls. New Zealand utilised their batting unit according to the condition. Conway batted at his genuine position in the first match when the team was struggling, and in the next match, they sent Neesham earlier to get acceleration. This strategical approach is helping New Zealand to overcome opposition. After losing to India 5-0 at home in 2020, Kiwis have bettered their performance in the T20 format, and they will look to add another series triumph.

Wellington’s surface is a decent T20 surface. It offers good assistance between bat and bowl. Chasing is an ideal call, but it might be tricky in the chase of 170 plus total. Spin has