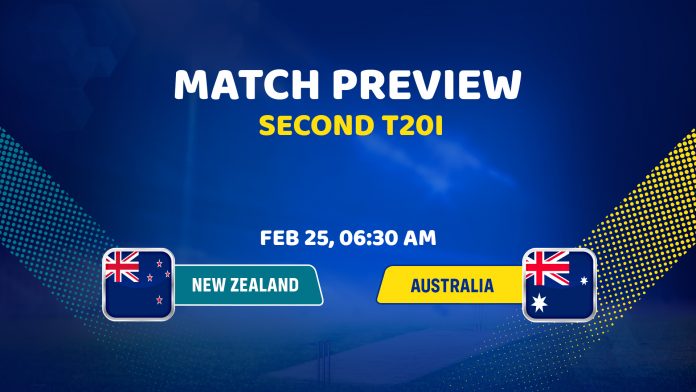 New Zealand will meet Australia in the second T20I to look for the 2-0 lead in the 5-matches series. Meanwhile, Australia would look for a bounce-back in the series.

Australia and New Zealand have reached Dunedin for the second match of the T20I series. Kiwis are in a terrific form this home summer, and after beating West Indies and Pakistan, they edged past mighty Aussies in Hagley Oval. New Zealand recovered from 19/3 to post 184 on board, and the credit goes to new Kiwi star Devon Conway who made his debut this summer and continued his top-form with a career-best unbeaten 99. He added vital runs with Phillips and Neesham to get a strong total. Early blows troubled Aussies, and New Zealand bowled them out on just 131. The comfortable victory of 53 runs in the first T20I boosted the confidence, and the best part is, the victory came without any performance from big players.

Martin Guptill has to find his form. He managed only 85 runs from six T20I innings this summer. He failed with the bat even in New Zealand T20 League, scoring just 46 runs at an average of 11.50. Williamson can give a chance to Fin Allen, who aggregated 512 runs in New Zealand T20 League this season at a strike-rate of 194. Devon Conway’s outstanding form is a big boost. Conway scored five consecutive half-centuries in the T20s. Glenn Phillips and Tim Seifert had some decent outings this whole summer. Ish Sodhi scalped four in the last outing, and Kiwis are likely to play with the same playing XI. New Zealand is the most balanced side, and the current favourites.

Meanwhile, Australia’s poor show in T20 format continues. Last year, they suffered defeats against England and India. After the COVID outbreak, Australia won just two matches out of seven. CA included some young players in the squad, but they failed to impress. Australia had a good chance to dominate Kiwis when they got New Zealand’s 3 wickets on just 19. Australia allowed Phillips and Conway to settle and later, hammered by Conway in death-overs.

Australia looked dull in the chase when they lost four wickets on just 19. Mitchell Marsh showed some intent, but he didn’t get enough support from another end. Aaron Finch’s poor form is a big concern. The skipper hasn’t seen such form in T20 format since his debut. Changes are likely to happen, but Langer may try a similar XI to allow young players to perform more. Finch and Maxwell both have to fire in the batting lineup, and Stoinis also has to play sheet-anchor in middle-order. Australia can bounce back if they stick to their key points.

Dunedin hosted T20 matches this summer. It offers good assistance between batting and bowling. Spinners will control the runs, but pacers will have the better edge. It should be a high-scoring affair. Chasing sides will have an advantage.