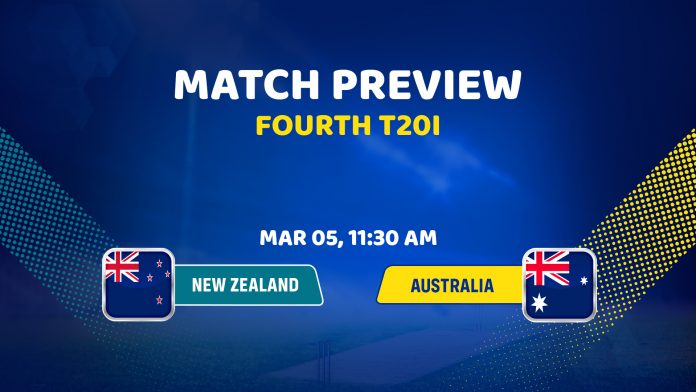 New Zealand faces Australia in the fourth T20I to clinch the series, while Aussies will look to level the series with yet another victory.

Australia and New Zealand will meet in the fourth T20I of the series. Australia bounced back after two back-to-back losses and defeated New Zealand in the third T20I. Aussies improved their game from the second match when they fall short of 4 runs and now, they edged past the hosts in the next game. Australia needs to keep this performance continue to level the series. New Zealand played the 5-matches T20I series twice and on both occasions, they lost the series. This is the third time, they are playing a long T20I series and currently, they look favourites to clinch the series.

In the last outing, Australia saw too many positives and the big positive was Aaron Finch’s form. The skipper finally scored a half-century after a series of failures. He scored 64 off 49 balls to start the trend and later, Glenn Maxwell fired with 31-balls 70. He smashed 28 off Neesham’s final over. Australia posted 208 in full 20-overs and in reply, Kiwis formed a batting collapse when they were two down on 80. Ashton Agar bagged a 6-wicket haul to dismiss New Zealand’s innings on 144. Australia’s last T20 series win came one year ago and there are on the verge of losing another. Josh Philippe also requires some runs at the top. The Bowling unit showed improvement after the failure of the first two matches.

Meanwhile, New Zealand lost its second T20 match of the summer and they have been a dominating side. Kiwis suffered a huge 64-run defeat in the last outing but they will look to add a win in the fourth T20I to clinch the series. In the last outing, Kiwis allowed Australia to post a big total. Neesham bowled his final over when Maxwell was set and his one over, helped Australia to get 208. Martin Guptill scored fine 28-balls 43 and his numbers are satisfying for New Zealand. Hosts lost their last 7 wickets on 35 which was a big batting collapse. They didn’t capitalise on the good acceleration of Guptill. Williamson’s side haven’t suffered back-to-back defeats this summer so they will look to seal the series.

Wellington’s surface is good for batting and it has a good amount of assistance to the batting side. Spinners can gain slight help from the pitch. 180-190 is a competitive total on this track. Chasing sides will have an advantage.