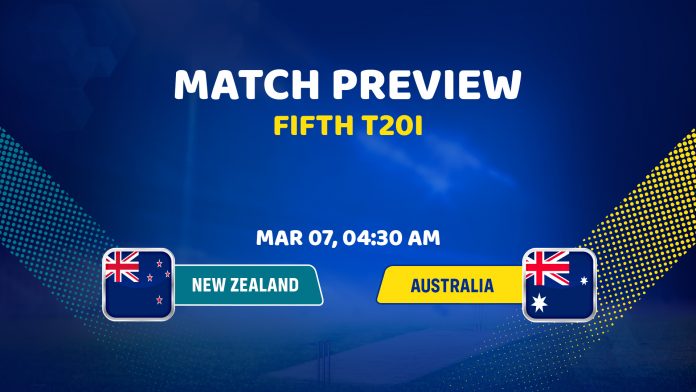 Australia and New Zealand take on each other in the final T20I of the series. The Series is now leveled with 2-2 after a comeback of Aussies in the last two T20Is.

Australia will end the New Zealand tour when they face the hosts in the final T20I. The poor form after COVID outbreak continues for Australia but somehow, they managed to keep themselves in the hunt. In the last one year, Australia won two ODI series but lost two T20 series including the home Test series as well. In the last outing, the Australian batting unit let them down but Finch played a fine knock to post a competitive total which was enough to restrict New Zealand on a turning track. Ashton Agar and Adam Zampa did the rest of the job. Australia tried some new players from the Australia T20 League and they had decent outings. Finch played a gritty knock in the last match and it was a one-man performance. His strike middle of the innings put more pressure on Australia.

If Australia loses, It will be the third consecutive T20 series loss for them and they won only four matches out of 10 matches, two came in the last two matches. If they lose one more game, India will take the second spot in ICC Rankings. Australia may try uncapped players to give them a try to perform in the last game. Australia needs to rebuild its T20 squad for the upcoming T20 World Cup because the current form is a big concern. Josh Philippe was the player of the series in the Australia T20 league but he didn’t leave an impact in this series. Maxwell and Stoinis both had just one good knock. The responsibility starts with the regular players.

Meanwhile, New Zealand are highly concerned after suffering back-to-back losses. Kiwis were outplayed by Australia in the fourth T20I. New Zealand have lost just three games since a 5-0 loss to India in the last home summer and two came in the last two matches. If they win, it will be the third consecutive T20I series win for New Zealand. This summer, Kiwis got new match-winners for the shortest format of cricket. Ahead of the T20 World Cup in India, the Blackcaps have made a solid team.

Ish Sodhi picked 10 wickets in the series at an average of 13.10 and on the other hand, Santner grabbed 6 wickets. This spinning duo has been pretty consistent and they will be key players in WC 21. Guptill is also back in form with back-to-back quality performances. Conway is the discovery of the home summer who made the debut this summer and ended the season as the leading run-scorer for New Zealand.

Wellington’s surface offers a good balance between bat and ball. After two matches, the track will offer plenty of help to spin. 160 plus total will be competitive on this track. Chasing sides will have an advantage.