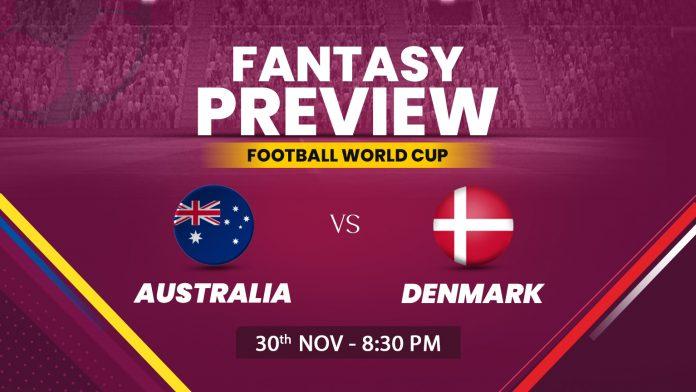 The upcoming match of Australia vs Denmark is essentially a winner-takes-all encounter. Both teams will finish their group-stage campaigns of the 2022 Football World Cup at the Al Janoub Stadium. The match will kick off at 8:30 PM IST. Let’s look at the fantasy team prediction for the match and find out the suggested fantasy XIs for the intriguing match of the Football World Cup.

Australia has the upper hand going into this match. The Socceroos are currently at the number two position with four points. Australia was not able to reach the Round of 16. Moreover, Australia made it to the knockout round just once, in 2006. The Socceroos must win the next encounter; however, they can still progress further in the tournament even if they draw against Denmark.

Denmark faces the real danger of early elimination from the 2022 Football World Cup. The exclusion of T. Delaney makes things difficult for the Danish side. Delaney suffered a knee injury against Tunisia on matchday one and will not be playing for the rest of the tournament.

Al Janoub Stadium will be the venue for the Group D fixture on Match Day 2 between Australia and Denmark. It is one of the most beautiful and scenic football stadiums which also has a retractable roof. The match will start at 8:30 PM IST on 30th November and lineups will be available at 7:30 PM IST on the MyTeam11 fantasy app.

Ryan (Australia): After conceding 4 goals against defending champions France, the Australian skipper kept a clean sheet in a 1-0 win against Tunisia. Playing in his 3rd World Cup, Ryan has kept 31 clean sheets in 76 appearances for the Socceroos. Another clean sheet from Ryan and his defence against the Danes might help Australia qualify for the pre-quarterfinals.

Eriksen (Denmark): The 2nd highest goalscorer in Danish football history, Eriksen will have a key part to play in the final group stage game against the Aussies. Centre of concern in the last major international tournament, Eriksen made a sensational return to international football in January 2022. The 30-year-old midfielder has scored 39 goals in 117 appearances for Denmark.