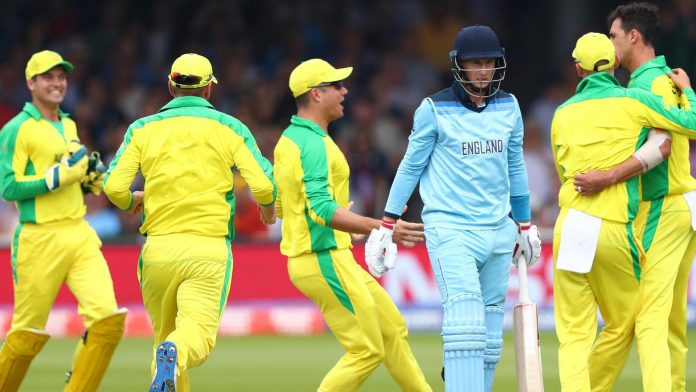 England, who were considered as the tournament favorites at the starting, now are in trouble to even qualify to top four. After their loss against Australia at Lords, the Englishmen have to win both their remaining matches to get into semi-finals.

On an overcast morning in London, England skipper, Eoin Morgan won the toss and decided to bowl first. But, the decision backfired as the Aussies skipper, Aaron Finch, and aggressive David Warner gave their team a solid start. Both of them added 123 runs for the first wicket in 22 overs before Moeen Ali dismissed David Warner. After his dismissal, another left-hander, Usman Khawaja joined the skipper in the middle, and both of them stitched 50 runs for the second wicket. Amid this partnership, Aaron Finch brought up the second century of this tournament.

But, England bowlers made a strong comeback in the match after dismissing two set batsmen Aaron Finch and Usman Khawaja within two overs. Hence, the score of 123/1 became 185/3. After this, every Australian batsman struggled to play their shots as the result of which the Kangaroos managed to reach only 285 runs in their 50 overs after that solid start.

When England came to chase the target, Australian pacers took good advantage of overcast conditions and showed the top four English batsmen the way to pavilion at the score of just 53 runs. Following this initial destruction, all-rounder Ben Stokes and wicket-keeper batsman, Jos Buttler showed good fight to make sure their team doesn't lack far behind. Both of them added 71 runs between them, but that was not enough for the team to win the match. In the end, England fell short by 64 runs.