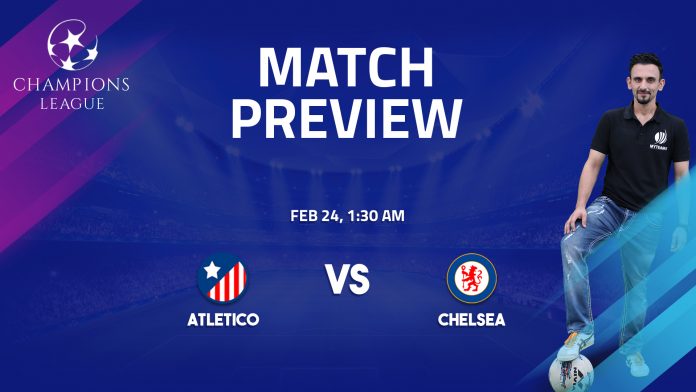 Chelsea and Atletico will face each other in the first leg of their last-16 Champions League 2020-21 clash tonight.

Champions League’s remaining first leg round-of-16 matches will be played this week. Two European heavyweights Atletico and Chelsea will lock horns in Romania for the Champions League's first-leg clash in the last 16. Madrid cannot take the home advantage due to COVID. Atletico are in terrific form, and they are the top contender to lift the La Liga title. They are sitting three points clear of second-placed Real Madrid with a game in hand. The margin would have been increased, but Diego Simeone's side suffered a shocking 2-0 home defeat to Levante. They have maintained the lead over Real Madrid, but their current form can hurt them later in the competition.

Atletico have just one win out of their last four matches. They cannot be proud of their performance in the group stage of the Champions League, where they won just two of their six matches. Despite these numbers, they managed to qualify for the last 16. Last season, they lost to German club Leipzig in the quarterfinal. They have reached in the quarterfinals five times of their last seven Champions League campaign. The Red and Whites overcame Liverpool at this stage in 2019-20, and the Spanish Club would be confident of dominating another English club tonight.

Diego Simeone's side have won nine of their 11 two-legged knockout matches against the Premier League clubs. When the last time both sides faced in Champions League, Chelsea won in the group stage with an aggregate success of 3-2. The Spanish club will be without Jose Gimenez, who suffered a muscular problem recurrence in the last tie with Levante. Stefan Savic may replace Gimenez for this fixture. Yannick Carrasco and Sime Vrsaljko will also be other absentees. Hector Herrera will also be out of the starting lineups due to his positive coronavirus test.

Meanwhile, Chelsea are in tremendous form, and they finished top of the respective group in the Champions League. The English club picked up 14 points from six games. Chelsea were also defeated by a German club in the last edition when they qualified into the last-16. The record against the La Liga clubs are not convincing as the Blues have won just two of their previous 11 away knockout fixtures. Chelsea are coming off a 1-1 draw with Southampton in the Premier League, and they took their unbeaten streak to seven matches.

After sacking Lampard, Chelsea improved their game, and they are confident of finishing this season in the top four. Thiago Silva didn’t feature against Southampton on Saturday, and the key center-back hasn’t recovered yet from the injury, so he will not be available for this game. Tammy Abraham is fully fit and recovered from an ankle injury.