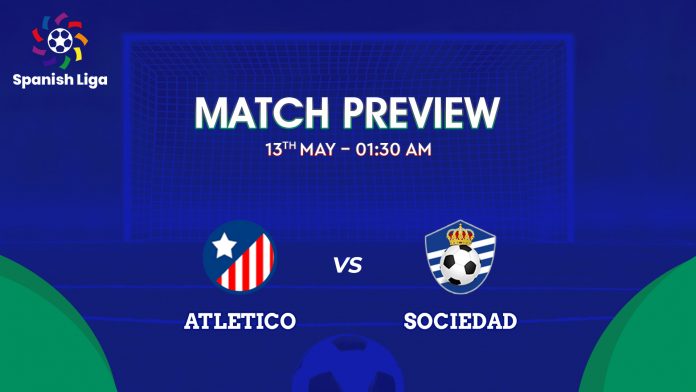 Title challengers Atletico will host Real Sociedad at Estadio Wanda Metropolitano to strengthen its position on top. Atletico played out a goalless draw against the rivals Barcelona, while Sociedad are coming off a 2-0 victory.

Spanish Liga is in its final stage and with three more games to go, Atletico Madrid will welcome Sociedad to increase the gap with title rivals Barcelona and Real Madrid. Diego Simeone's side makes a two-point lead over Real Madrid and Barcelona. They maintained their top position after the goalless draw against Barcelona. Real Madrid also played a 2-2 draw with Seville which helped them to retain their position.

Atletico Madrid have won 23 matches out of 35 so far this season and they are favourites to win the title after a gap of 7 years. Diego Simeone's men kept 18 clean sheets in this dream season and conceded just 22 goals only. Los Colchoneros had a solid hand over trophy at the midway of the season but in 2021, we saw a downfall in their performance. Atletico have dropped 12 points from their last nine games and it helped Barcelona and Real Madrid to reduce the margin. Los Colchoneros don’t need to believe in any mathematical equation as they just need to win their remaining three games to clinch the title. If Atletico loses here and Barcelona and Madrid win their mid-week fixtures, the glory might be slipped.

Meanwhile, Real Sociedad are entering into Atletico’s fortress after beating 10-man Elche 2-0 last week and they made a return to winning ways, thanks to the goals from Aritz Elustondo and Mikel Oyarzabal. Imanol Alguacil's side has now won three of their last four top-flight games. Their previous away victory came against Eibar. Sociedad has now taken the fifth spot in the table with 56 points and have a two-point advantage over Betis. Los Txuri-Urdin would also look for three points to strengthen their qualification chances for the Europa League.

Atletico will be without the service of Thomas Lemar and Joao Felix is likely to replace him. Centre-back Jose Gimenez might be available. Sociedad will be without Mikel Merino and two other players Carlos Fernandez and Aihen Munoz will also miss out.