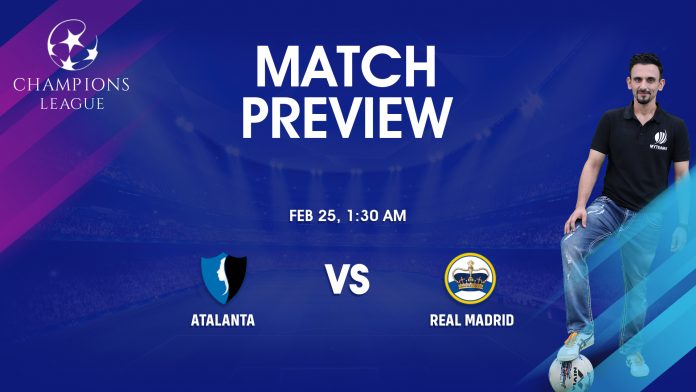 Atalanta will host Champions League giants Real Madrid in the last 16 ties of the competition. Atalanta finished second in the respective group, while the Spanish Club topped their respective group.

13-time European champions are also on the verge of losing the La Liga title to Atletico Madrid. Zidane’s side are three points behind Atletico with playing one extra game. Their last Champions League triumph came in 2017-18, and since then, they have been knocked out at this stage to Ajax and Manchester City.

Madrid have won their last four matches by keeping clean sheets in their last three. Atletico Madrid's defeat to Levante can boost their chances to reduce the margin. Champions League's fifth-highest goal-scorer, Karim Benzema, will miss this fixture due to injury. Casemiro is one yellow card away from a suspension, but he will play in this crucial game.

Meanwhile, Atalanta have improved in the last few years, and they might be confident of edging past Real Madrid in the first-leg game. The Italian club are coming off a 4-2 victory over Napoli and are unbeaten from the last five matches. 12 days ago, they earned 3-1 aggregate success over Napoli in the Coppa Italia semifinal. Gian Piero Gasperini's side finished second in Group D to find themselves in the knockout stage. They currently stand at fifth in Serie A 2020-21, two points behind Juventus and 10 points to leaders. Right-wing back Hans Hateboer will be unavailable for this match due to injury, and Joakim Maehle also has a fitness issue.