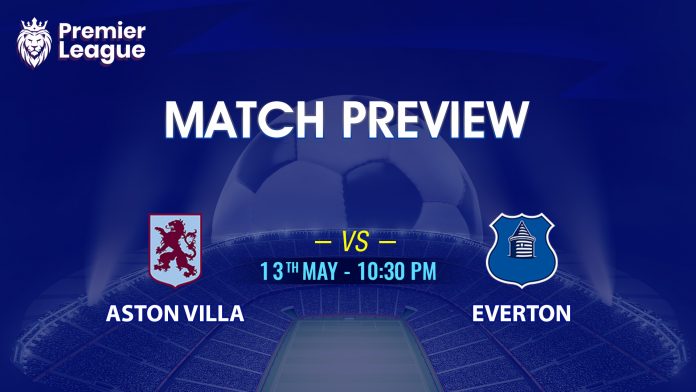 Everton will make travel to Aston Villa to find a third successive away win in Premier League to keep the Europa League qualification high.

Aston Villa will host Europa League challengers Everton in Premier League tonight. Both clubs had a great history of playing together as it will be their 206th meeting between two which is a record in English football. Everton are boosted after two away wins and they are in the race to finish fifth in the table. Everton have assured one thing for sure, they gonna finish inside the top half and it will be a big improvement for Toffees after finishing 12th in 2019-20. The way Everton started the season, they could have finished in the top four but they can still eye Europa League qualification. They are just 3 points behind to 5th placed West Ham with one game in hand.

Their poor home record gave them a big blow to clinch European qualification. They suffered eight defeats at Goodison Park but their recent away success can boost their game. They have won 11 games and drawn three out of 17 away fixtures. They come third in away success after Man City and Man United. They have won three of their last five away top-flight matches against Villa. Carlo Ancelotti’s side can back themselves for the fifth spot. With three points here can help to equalise West Ham, and they also know, Liverpool will face United this week so it might open the door for Everton if Man United clinch the game.

Meanwhile, Aston Villa are entering into this fixture after a disappointing loss to Man United after scoring the opening goal. Bertrand Traore's goal kept Villa on top at the end of the first half but second-half strikes from Bruno Fernandes, Mason Greenwood, and Edinson Cavani assured easy three points. Villa had beaten Everton 12 days before when they clinched the away game 2-1 but their entire season is not so convincing. Who would believe Aston Villa will suffer like this after thrashing reigning winners by a huge margin.

If we compare to last season, Villains can be proud of this performance as last year, they were in the position of relegation. Smith’s side has lost five of their six fixtures against the above-ranked sides. They would look to make a league double over Toffees after 2000-01 to ensure the middle table finish. They are two points behind Leeds and seven points behind Everton. Gunners had already defeated Chelsea last night and Leeds will face Burnley. Villa can target three points to look themselves in the top ten.