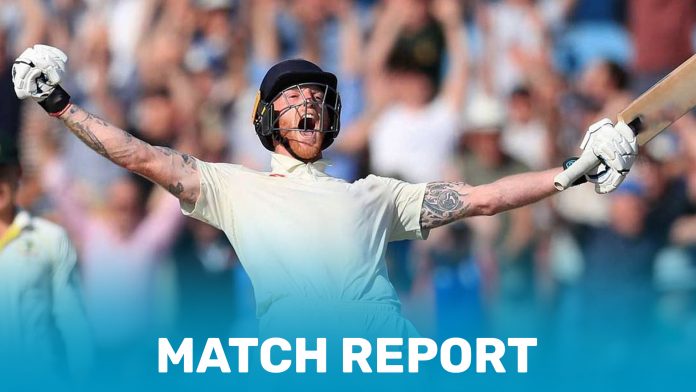 First World Cup Now Ashes, Ben Stokes name will have a separate page in cricket history. His heroic batting performance in the third Ashes, undoubtedly has taken his game to another level. From 67 all-out in the first innings to winning the match by one wicket, the entire Cricket fraternity can’t stop themselves from praising England’s remarkable turnaround for winning the game that they could have easily lost.

Chasing the massive target of 359, Joe Root and Joe Denly stitched 126 runs between them that provided some stability in the chase after being slumped to 15/2 in the start of the innings. However, despite this partnership the host lost momentum as the score of 141/2 had soon turned 286/9.

But, once again it was England’s World Cup hero, Ben Stokes, who pulled things in their favor with his majestic unbeaten 135 runs knock. The 28-year-old all-rounder added 76 runs for the last wicket with Jack Leach that helped England to record their highest ever chase in Test cricket and open their account in World Test Championship.

Before the start of match England’s skipper, Joe Root won the toss and opted to bowl first. His bowlers supported his decision and showed Marcus Harris and Usman Khawaja the pavilion way at the start of the innings. However, with David Warner and Marnus Labuschagne’s sensational innings, the visitors managed to reach 179 runs in the first innings. David Warner scored 61 runs while Marnus looked good for his 74 runs.

In chase, Josh Hazlewood’s fierce bowling performance, England batting collapsed drastically as the team managed to score only 67 runs in the first innings. Hazlewood picked up a fifer in this innings. Tim Paine-led side was in commanding position with a lead of 112 runs after the first innings. Although, England bowler picked up four wickets within the total of 100 but once again it was Marnus Labuschagne shattered England’s bowlers and played a dazzling knock of 80 runs to take his team to 246 runs.

In the fourth innings, all the Australian bowlers looked woeful in front of Ben Stokes who smoked 11 fours and eight sixes to help England to level the Ashes series by 1-1.