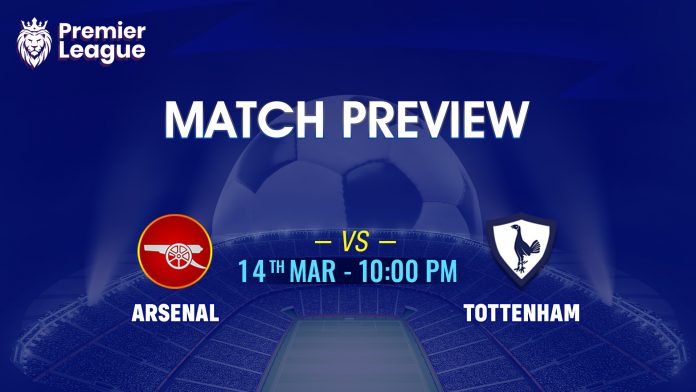 Arsenal and Tottenham will lock horns in a high-voltage weekend clash of Premier League 2020-21. Both sides are fighting hard to claim the spot in the top four.

After the busy European Competition matches, Premier League games are back in action. Tottenham and Arsenal will meet in this weekend’s hot favourite clash at Emirates Stadium. Arsenal will back to their home ground after a 1-1 draw at Turf Moor against Burnley. Aubameyang scored the early goal for Gunners in the 6th minute which was canceled out by Chris Wood’s 39th-minute strike. Arsenal are coming off a 3-1 first-leg victory over Olympiacos in Europa League. Three away goals assured the quarterfinal ticket for Arsenal in Europa League. Gunners last played at Emirates to Man City and lost to leaders 1-0. Their most recent win at home came against Leeds when Aubameyang’s hattrick assured a 4-2 victory.

Gunners stand at 10th before entering into this PL weekend after Europa League. Europa League qualification for next season looks shaky for them and they have to better their numbers. They are seven points behind their Sunday-rivals. Gunners are winless from the last five matches against Spurs and they have lost just two of their last 35 home games against Tottenham. Their home numbers are slightly better as Gunners have lost just one game of their previous seven home league games which came against a top-side Man City. They have six home defeats this season which is not great considering their previous performances in Premier League. If they lose, it will be the worst home record for them.

Meanwhile, Spurs are highly motivated after Europa League success and they are the top contender to finish in the top four. Tottenham are coming off a 2-0 win over Dinamo Zagreb in first-leg round-of-16 ties in Europa League. They have won their previous three games in Premier League and unbeaten from the last five matches across all competitions. The Lilywhites occupy the seventh spot in table and 5-points behind 4th placed Chelsea and 3-points adrift of 5th placed West Ham. If they win, they will add three consecutive victories against Arsenal since 1974 and they can also make a league double over Arsenal since 1992-93. The duo Harry Kane and Son have delivered an outstanding partnership throughout the season. Spurs will surely look for three points in the pursuit of a Champions League spot.