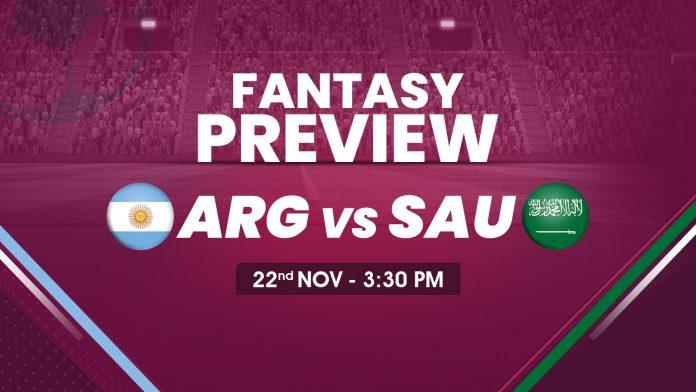 Football action in Group C kicks-off on Tuesday as Argentina, one of the favourites to win the World Cup take on Saudi Arabia. L. Messi, playing in his last World Cup, will be keen to add the most important piece of silverware to his trophy cabinet. Argentina are heavy favourites against Saudi Arabia but the Asian side will try to do everything in their power to come out with a point or more in this fixture. Let’s look at the fantasy team prediction for the match and do read till the end if you want to see suggested fantasy XIs.

The reigning South American champions get their World Cup campaign underway on Tuesday. Argentina are the most in-form team in the national side and are undefeated in the last 38 international matches. La Albiceleste are ranked 3rd in official rankings only behind Brazil and Belgium. The tournament is special for Argentina and its fans as L. Messi has already announced his retirement after the World Cup.

The middle-eastern nation is all set to play in their 6th World Cup since making their debut in USA 1994. Saudi Arabia have failed to go beyond the group stage since 1998 and their best performance came in USA 1994 when they progressed to the last-16. Currently ranked 49th in the world, they are placed in a strong Group C along with Argentina, Poland and Mexico.

Lusail Stadium will host the opening Group C fixture between Argentina and Saudi Arabia. The stadium is also the venue for finals of the 2022 Football World Cup. The match will begin at 3:30 PM IST on 22nd November and lineups will be available at 2:30 PM IST on MyTeam11 fantasy app.

L. Messi (Argentina): The 7-time Ballon d’Or winner would love to win the World Cup and cement his legacy as the greatest ever footballer to play the game. After a poor second-half in 2021 campaign, Messi is back to his best and has provided 14 goal contributions in 7 matches for Argentina in 2022.

M. Al Owais (Saudi Arabia): The 6’2 ft goalkeeper is the only one standing for Saudi Arabia between a competitive match or a resounding Argentine dub. Al Owais has kept 6 clean sheets in the last 10 matches for Saudi Arabia and needs to be on his top game to prevent a hammering against Argentina.