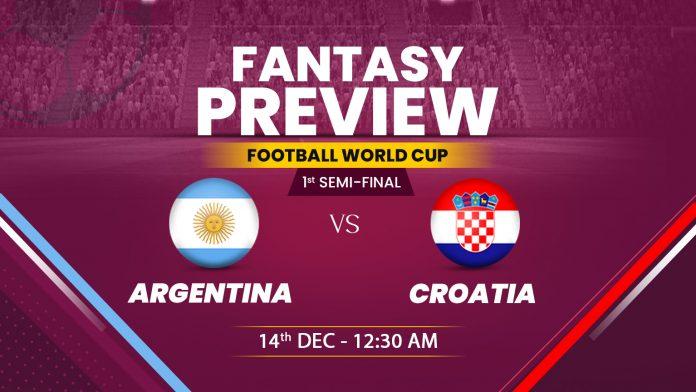 In Match 61 and the first semi-final fixture of World Cup 2022, Argentina and Croatia will face each other at the Lusail Stadium. 2014 runners-up Argentina and 2018 runners-up Croatia have the chance to claim the glory they missed out on in previous campaigns. It will be a closely-contested match, with both teams eager to secure a place in the final. Let’s start with the team preview and expected starting XIs for the match. Do read till the end for suggested fantasy XIs.

The semi-final match between Argentina and Croatia is expected to be a thrilling encounter, with both teams impressing with their strong form in the tournament. Croatia, led by captain Luka Modric, has impressed with their solid defence, conceding only 3 goals in their 5 matches. The experienced and energetic defensive unit of Croatia will be looking to use their strength to keep Argentina’s attack at bay. Left-back B. Sosa is back from his suspension and set to feature in the semis for Croatia.

Meanwhile, Argentina has scored 9 goals in their 5 matches. The team has excelled in attack and will be relying on their forwards once more. Led by superstar Lionel Messi, the 2014 runners-up have the chance to get within touching distance of the trophy once more. La Albiceleste will be without full-backs M. Acuna and G. Montiel due to suspension.

The Lusail Stadium will host the tournament’s first semi-final between Argentina and Croatia. The 80,000-seater stadium features a retractable roof and has been designed to be a sustainable and technologically advanced venue. The match will kick off at 12:30 AM IST on 14th December and the teams will be announced on 13th December at 11:30 PM IST on the MyTeam11 fantasy app.

J. Gvardiol (Croatia): Defender J. Gvardiol is set to play a crucial role in his team’s semi-final match against Brazil. The tenacious defender is one of the best in the game in 1v1 defending and playing out from the back. In addition to his defensive abilities, Gvardiol is a significant threat from set pieces and can cause comparatively smaller Argentine defenders all sorts of problems.

L. Messi (Argentina): With 4 goals and 2 assists in the World Cup so far, Messi is already in contention to win his 2nd Golden Ball if La Albiceleste makes it to the finals. The Argentine skipper has hit a different gear in the knockout stages and is expected to continue his fine form against Luka Modric & Co.