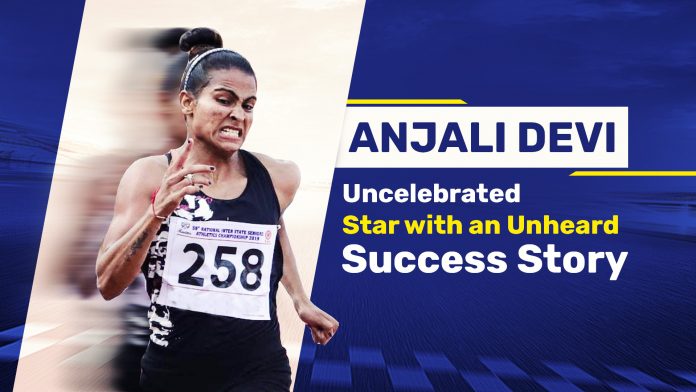 The land of India is busy producing stars after star and occupied in the running wheel of life; we are too busy to even notice the achievements and glory these sports personalities are bringing to the country. Well, to start afresh, MyTeam11 has decided to introduce you to sports personalities who are lost somewhere in the big sea. It’s time someone extends a hand & pull-them out up & front of the sports fraternity.

Today, we bring you an unheard story of one such young athlete, who, even after becoming the fastest Indian to complete the 400-meters run this year, is an unknown name to the major part of the population. We bring you the story of, a middle-distance runner, Anjali Devi. Read on to know how this Haryana-based runner fought all the odds to emerge as a champion.

Life Story: Going Back in Time

Life has been a rough road for Anjali ever since her birth, witnessing plenty of ups and downs in a very short span of life, Anjali has been fighting to make a place for herself in this highly competitive society. The 21-year-old athlete belongs to a village situated few kilometers away from Rohtak, a city in Haryana.

Time & destiny played a major role in the inspiring story of Anjali. The young athlete doesn’t have a father and has seen her mother, the breadwinner of the home, struggling to make ends meet. Her mother sells milk to earn a living & struggle has been associated with Devi ever since.

Anjali wasn’t into running since the beginning but always had something for sports. She used to play Kabaddi in the initial days of her career, where she was spotted by her childhood coach, Rohtash’s sister. The determination & the hunger for victory in Anjali’s eyes made Rohtash analyze her potential right away, who then trained and shaped Anjali into an athlete. Today, more than two years after Rohtash associated with Anjali, their hard work and determination are pulling-off big results for the two.

Fastest to 400 meters in the Open Nationals

The Haryana-born runner created history by completing a 400-meter middle-distance run in just 51.79 seconds in the Open Nationals held at Bhubaneshwar, last year. With this fascinating effort and feat, Anjali became the fastest Indian to complete a 400-meter run at the Open Nationals, breaking a 17-year-old record, which was previously held by K Beenamol. The achievement was one of its kind and earned Anjali the 4th spot in the list of Fastest 400-meter runner across India Asia during the 2018 season. Meanwhile, the first three spots being occupied by Salwa Eid Naser BRN, Hima Das, and Nirmala Sheoran, who achieved the feat in 49.08, 50.79, and 51.25 seconds respectively.

India’s Representative for Middle-distance Run at the World Champions

After achieving the amazing feat, Anjali became the only Indian woman to achieve the world championship qualification mark for the 400-meters run, at just 51.79s. After the Open Nationals victory, the athlete endured an ankle-injury which forced her toward a 1-month rest, building speculations about her participation in the inter-state meet at Lucknow & World Championships.

But nothing can stop a champion from getting its desires fulfilled. After a month’s Devi was back in action when she recently recorded a personal best at the National Inter-State Senior Athletics meet held in Lucknow on August 29. Achieving the feat in just 51.53 seconds, Devi broke Hima Das’ mark set in July this year.

The athlete is now looking forward to joining a national camp ahead of the upcoming World Championships that are slated to be held from 28th September- 6th October. Surpassing every hurdle faced, the young lad has come a long way, but it is heart-wrenching to know that with breath-taking achievements, she is still an uncelebrated star whose story is unheard. Here’s to the remarkable achievements of Anjali Devi, “You Go Girl!”