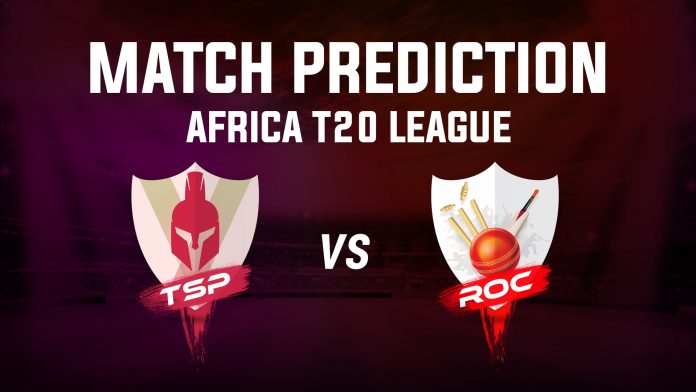 The 19th Match of Africa T20 League will witness a thrilling encounter between Tshwane Spartans and Paarl Rocks today at Super Sport Park in Centurion. The match is scheduled to start at 9:00 PM IST. Both the teams are coming into this match with a win in their last game. While Spartans clinched their second victory against Jozi Stars, Paarl Rocks continued their dream run in league with a win against Nelson Mandela Bay Giants. Both the teams will be facing each other for the second time in the ongoing season.

Paarl Rocks are currently table toppers of the league with four victories in five matches. Their only loss came against Spartans. However, this time, Rocks would be keen to turn the table against Tshwane. James Vince has been their top batter so far, but Rocks would want a significant contribution from their other batsmen as well. James Vince has scored 189 runs for Paarl Rocks from 4 matches at an average of 63 and a strike rate of 157.50 with the top score of unbeaten 86. Bjorn Fortuin and Tabraiz Shamsi have been the best bowlers for the Paarl Rocks. So far, they have picked up 7 and 9 wickets for the Rocks respectively.

Tshwane Spartans, on the other hand, are standing on the third place with two wins out of their two completed matches. The team is yet to lose a game in the tournament. We got the glimpse of vintage AB de Villers in the last match as the former South Africa captain scored a crucial half-century. Petrus van Biljon has also made some useful contributions down the order. Spartans strong batting and Rocks formidable bowling will make this game an intriguing contest.

Both teams have faced each other three times thus far, and Spartans came out on top in all the three games.

The pitch is expected to assist the pacer, a score of around 145 can well be competitive.

Rain will not play a spoilsport as the reports suggest 0% chances of rain. The temperature is expected to be somewhere around 18-22 degrees Celsius.