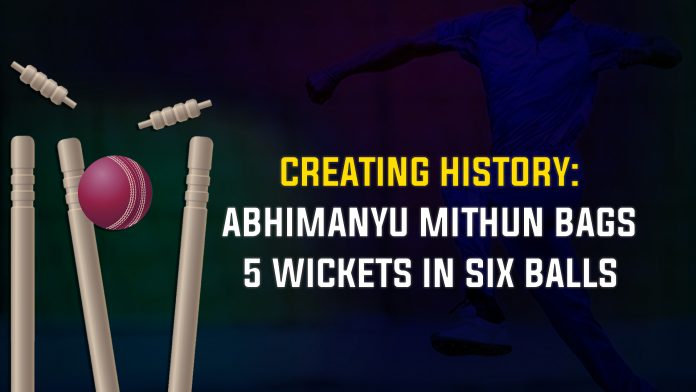 The semi-final clash of the ongoing Indian T20 battle has caught the eyeballs of the spectators as the defending champions reached the final. Karnataka went an extra mile to square off against Haryana in the semi-finals conducted at the Lalbhai Contractor Stadium in Surat. The match saw the former registering a resounding 8-wicket win over the latter, reserving their spot in the summit clash of the competition. But the man who stole the limelight during the entire match was none other than Karnataka’s medium-pacer Abhimanyu Mithun.

Lately, Mithun has been in the news for all the wrong reasons, as he was summoned for investigations into a spot-fixing scandal. Unfazed by these reports, Mithun put his heart and soul into the game and produced a stunning 20th over against Haryana. Mithun’s bowling efforts stood out as he picked five wickets in six balls, creating history in Indian cricket. The seamer first dismissed Himanshu Rana (61) in the 20th over of the innings.

Then, he got rid of Rahul Tewatia (32) and completed his hat-trick by sending back Sumit Kumar (0). After that, he went on to pick Amit Mishra (0), and Jayant Yadav (0) off the fourth and fifth delivery respectively.

This marks Mithun’s second hat-trick this season. With this, Mithun has emerged as the first bowler to accomplish a hat-trick in all three formats of India’s domestic tournaments.

Throwing light on his praise-worthy performance, the 30-year-old player said, “You don’t plan these things. But it’s like a dream come true. One over can change a lot. I have worked really hard in the off-season, so am reaping fruits for all the hard work.”

Since his latest performance rekindles hope for his career, “You never know. One good game and you may get an India call again. So whatever opportunity you get, you have to deliver,” he concluded.