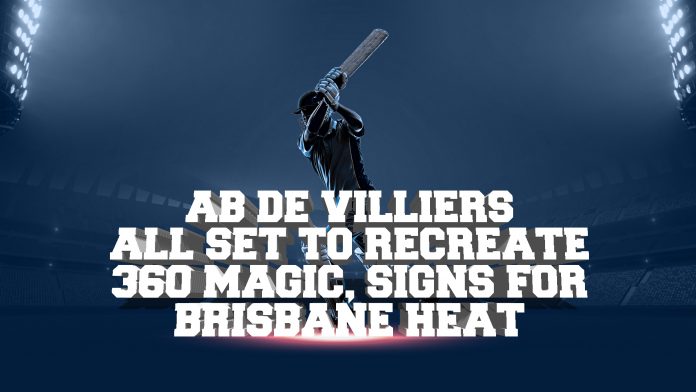 After doing wonders with his performance in the international cricket, South Africa star AB de Villiers wrapped up his international career in the year 2018. As per the recent reports, the player is all set to make his first appearance in the Big Bash League. He has signed for Brisbane Heat for the 2019-20 season of the league.

The talks of de Villiers joining Brisbane Heat started after the franchise approached the player following the announcement of Brendon McCullum’s retirement. AB de Villiers will be joining the franchise for the latter half of the league.

“I've spoken to Chris [Lynn, the Heat captain] a few times after games in the IPL," de Villiers said. "I always enjoy the way he plays the game, he really goes after the bowling, he attacks the game, and he seems like a really good team-mate. He gives his best shot for the boys. I'm looking forward to joining forces with him.

"You go through moments after retirement when you're really keen to play, then you just want to be at home," de Villiers said. "It's really difficult to balance that out, time spent at home and time away, so I'm very selective of where I play at the moment, and the body is getting a bit older so I can't play too much.

"I like to be at home over the Christmas and New year period, but I couldn't say no to coming to Brisbane and joining in on the fun. It's one of the best tournaments around and I've been following it for a while now. From what I've heard from other players who have played there, it's just all positives. The standard of cricket is good, and they get big crowds."

“I must say the Brisbane Heat have always stood out to me," added de Villiers. "They play the kind of cricket that I want to play – it's quite aggressive and they go after the attack. And the Gabba is a beautiful cricket ground. It’s got a great wicket and games are always of high quality.

“Lynn is one hell of a player. You have a sleepless night or two before you play against him. He’s a destructive batter who can take the game away from you in a couple of overs, so it’s great to have him on our team."

The upcoming season of BBL is scheduled to begin on December 17, 2019. However, de Villiers will be making an appearance for the team only in the next year, as he plans about spending holidays with his family. The player had a wonderful T20 Blast career, scoring 384 runs in 8 matches with an overall strike rate of 182.19.