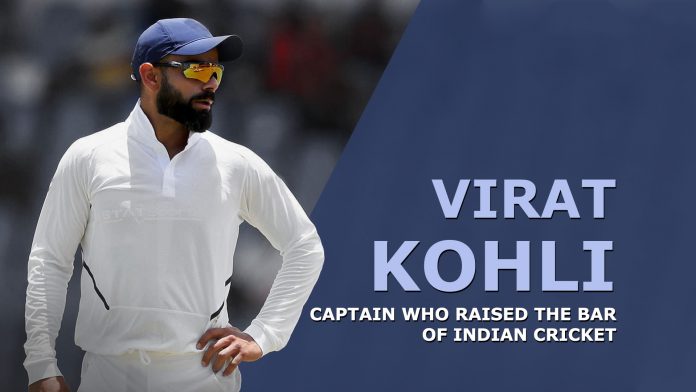 In the first Test of India tour of Australia 2014 played at Adelaide which was also Virat’s first Test as a skipper, the entire cricket fraternity can’t stop themselves praising a man who gave Indian fans a reason to enjoy. Indian team playing in the absence of MS Dhoni who was ruled out due to injury, Virat was given the responsibility to lead the team. Chasing the target of 364 runs on the final day of Test, Virat Kohli and Company nearly pulled off a miracle before Indian team fell short by 48 runs. In the match, Kohli scored 115 in India's first innings hence becoming the fourth Indian to score a hundred on Test captaincy debut. In the second innings, his 141 runs innings destroyed the aggressive bowling attack. This match gave a glimpse of Virat’s capabilities as captain.

However, after MS Dhoni’s sudden retirement from red-ball cricket amid this series only, the responsibility was handed over to young Virat Kohli to uplift the status of Indian Test team. In the fourth Test, Virat captained the Indian Test team for the second time, and with his 147 in the first innings of the match, he became the first batsman in Test cricket history to score three hundred in first three innings as Test captain.

In five years only, Delhi born cricketer has taken the Indian Test team to another level. He led the Indian team to the top of ICC rankings and created history in last year in Australia. In December 2018 Men in Blue under the leadership of Virat Kohli slumped the Aussies in four-match Test series in their backyard by 2-1. This victory was special because it happened for the first in history when Indian team managed to register a Test series win in Australia.

Kohli is the man of words; he always does what he says. In one of the post-match presentation he said, “I have to set an example if I want results from other players.” Along with captaincy, he has taken his batsmanship to another level. His batting performance in 2017 home season was remarkable. In this season, Kohli became the first batsman ever to score double centuries in four consecutive series. Apart from this as the captain of Indian cricket team, he holds the record for most consecutive wins and led India to longest unbeaten streak in Test cricket. Under his captaincy, India won 19 test matches in a row. In the recently concluded West Indies vs. India Test series, 30-year-old player, Virat surpassed the great MS Dhoni in terms of most wins (28) as a captain in Test cricket.

Virat’s captaincy style is similar to former Australian players who enter the filed only play for a win. The intensity and fight, Virat shows in the field are tremendous. Due to this behavior of his he is reaching heights. Talking about his captaincy stats among players from different nations who have led their national team in Test Internationals, he grabs the fifth position.

Virat Kohli will like to wind up the records of G. Smith, R. Ponting to become the most successful Test skipper in the World. And there is every chance he can achieve that feat as he has age on his side.

The Indian team got a perfect start to World Test Championship after defeating the Caribbean giants by 2-0. After playing South Africa and Bangladesh in-home, Virat Kohli troops will fly to New Zealand. Kohli will be leading India for the first time in New Zealand.