A look back at IPL 2019 controversies 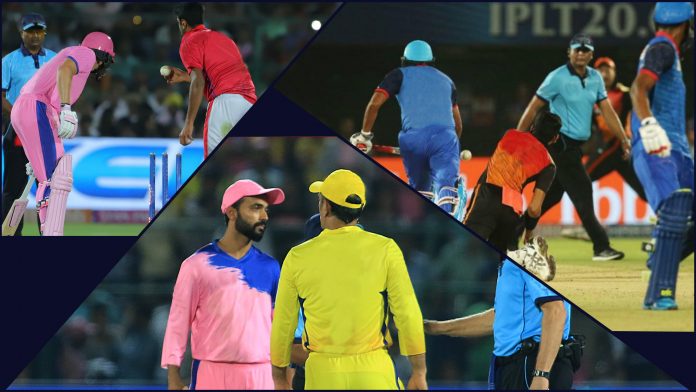 The Eliminator played between Delhi Capitals and Sunrisers Hyderabad saw some high voltage drama in the final over of the innings. Sunrisers Hyderabad needed 4 runs from the final over. But in the third ball of the over, Amit Mishra was given out for changing the path in the middle of his run. According to the law of cricket, if any batsmen tries to use his body part or bat at the time when the fielder throws the ball, then he will be given out without any concern. The same happened in the match when, Hyderabad ‘s left-arm pacer, Khaleel Ahmad collected the ball from the keeper to throw it to the non-striker’s end, and at the same time Amit Mishra changed the course in the middle of the run. When on-field umpires reviewed the whole incident again, Amit Mishra was found doing that intentionally as a result of which he was given out. Previously, Yusuf Pathan, playing for Kolkata Knight Riders in 2013 was given out for obstructing the field against Pune Warriors India.

Captain cool has been heavily criticized for losing his cool and opposing the on-field umpire in the final over of the 25th match played between Rajasthan Royals and Chennai Super Kings. Chennai Super Kings needed 18 runs from the final over to win. In the third ball of the over, Ben stokes dismissed MS Dhoni. At this stage, Chennai needed 9 off 3 balls. When Ben Stokes bowled the fourth ball of over, the on-field umpire gave it a no-ball at first, but soon turned his decision. This made MS Dhoni loose his calm and come back to pitch to confront umpires, but at the end the decision stayed the same and Dhoni went back to the dugout angrily. Following this uncharacteristic act, he was fined 50% of his match fees.

In the 4th match, Rajasthan opener Jos Buttler was mankaded by R. Ashwin when he was batting on 69. Chasing 185 for victory, Buttler was playing the anchor role for the Rajasthan Royals. The controversy took place when Ashwin came to bowl his final over, it was the fifth ball of the over when the spinner mankaded the opener. Buttler, who had taken few steps out of the crease was eventually given out.  According to the rules of the game, Ashwin has not done something wrong (comma) but he was heavily trolled for going against the spirit of the game. This was not the first time when mankading incident took place, in 2014 when Sri Lankan team toured England, Sri Lankan spinner, Sachithra Senanayake mankaded the same batsman, Jos Buttler.

If you want more updates and information about the latest happenings in the Sports World, then stay tuned to MyTeam11.