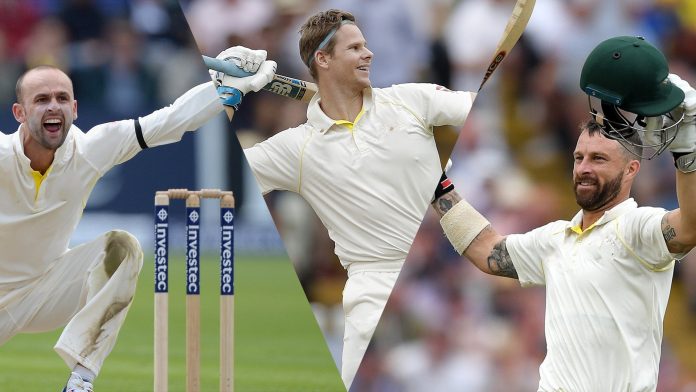 Australia defeated England by 251 runs at Edgbaston and lead by 1-0 in the five-match series. With this victory, Australia opened their account in the test championship points table. Australia had managed to do what no team could in the past 11 years. From being 122/8 in the first innings to winning by 251 runs was an exceptional turnaround. Let’s have a look at the top performances by Australian players that made it possible.

Two centuries in a single test match, the 30-year-old batsman Steve Smith made a perfect comeback after a year ban for his part in the ball-tampering scandal. In the first innings of the game, his 144 runs helped the Aussies to reach 284 runs which looked impossible. At one stage Australia were slumped to 8/122 but due to Smith’s invaluable partnerships with Pat Cummins and Nathan Lyon respectively, Australia touched a respected total of 284. Smith classy 144 runs combined with 16 fours and two sixes was an excellent display of batsmanship.

Steve Smith’s appetite for runs didn’t stop as his 142 runs in the second innings unassisted the England bowler in the absence of Jimmy Anderson who injured himself in the first innings of the match. Trailing by 90 runs after the first innings, Australian opening combination of David Warner and Cameron Bancroft struggled and went back to pavilion early. After this initial destruction, once again the responsibility was on Steve Smith, and he lived up the expectation and played a sensational knock of 142 runs which included 14 fours.

With these consecutive centuries, Steve Smith becomes the second fastest batsman to score 25 test centuries. Sir Don Bradman was the fastest to reach this milestone in 68 innings.

Wicket keeper batsman, Mathew Wade’s journey in international cricket has not been easy so far. He made his test debut in 2012, but due to his inability to display consistent performances, he failed to fix a place in the Australian team. After being called in Australia’s squad for Ashes 2019, the left-handed batsman must have aimed to grab the opportunity with both hands. Although, in the first innings he failed with the bat and went to the pavilion without troubling the scorers but he scored a brilliant century in the second innings when the team was in trouble.

He played a scintillating knock of 110 runs in the second innings to take his side out of danger. During his stay on the crease, the 31-years-old batsman looked in great touch and smashed 17 fours to get the third century of his Test career.

After making a strong comeback with the bat in the second innings, the hopes were all up to Australian bowlers on the final day at Edgbaston to finish the task. And the bowlers didn’t disappoint as they halted the home team to 146, hence winning the match by 251.

Nathan Lyon was the centerpiece of the final-day plan. Australia’s off-spinner knocked off England batsmen in their second innings.  In his 20 overs the spinner Nathan Lyon took advantage of the worn pitch to claim 6 wickets for just 49 runs. What gives his performance more worth is before Edgbaston test, Nathan Lyon had never taken a five-wicket haul in the fourth innings of a Test away from home.

Since 18 years Australia hasn't won an Ashes series in England and the Edgbaston win could definitely be the spark they desperately need to win the series this time.