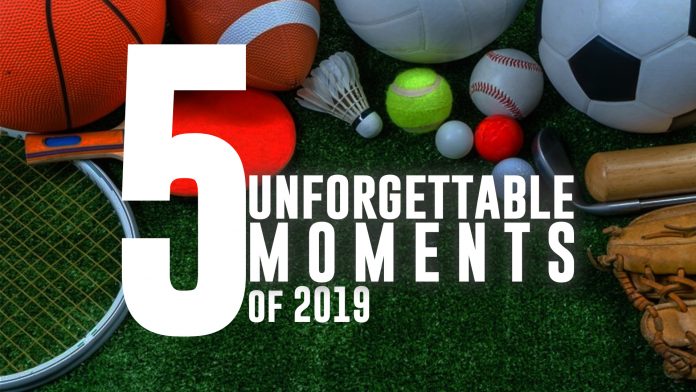 As the year 2019 is now coming to a close, MyTeam11 looks back at this glorious year filled with exciting games, marvelous performances and some historic moments. Many old records were broken, some new ones were created, budding talents emerged from every nook and corner of this world and millions of fans experienced a sports spectacle. If we are supposed to describe this year in one word in terms of notable sporting events, then the word would be – SPORTACULAR. Keeping the sports calendar in mind, MyTeam11 has picked five most surprising and iconic moments of 2019 that prove that this year has been an extravagant sports delight!

Scroll down to know which are these momentous events.

Touted as the greatest comeback in sports history, Tiger Woods won his fifth Masters Title in April at Augusta. This marked his 15th major victory. He had been through a rough patch in life due to four back surgeries and personal scandals. It has been 11 long years since he has yearned to bag a major title since his last championship in 2008.

The 43-year-old Woods is arguably one of the best golfers of all time. This moment of glory has earned him his fifth Green Jacket, which revives the trust in his potential of playing at a high level.

The US Women’s football team conquered the female circuit in the international sphere with their resounding victory at this year’s World Cup. Led by Golden Boot and Golden Ball winner Megan Rapinoe, the team managed to get its second consecutive World Cup title after 2015.

The US team thrashed the Netherlands by 2-0 in the final, and lifted their fourth tournament title, more than any other nation in history. As the team celebrated their landmark victory, the stadium echoed with the chants of ‘equal pay’ to bring gender income disparity in sports to notice.

Liverpool defeated their English rivals Tottenham Hotspur by 2-0 and grabbed their 6th Champions League crown. It is their first in 14 years. Liverpool fell short of winning the Premier League title in 2018-19, but the Reds brought the UEFA Champions League trophy home.

It was truly a nail-biting encounter between two cricket giants – England and New Zealand. The final was one hell of a clash that saw both the sides, ending up in a tie. England were chasing the target of 241 set by New Zealand in 50 overs.

The tied score meant that the two teams had to play out a Super Over. Even that could not separate the teams, as both of them again scored 15 in the allotted over. Ultimately, England won by the virtue of boundary count.

Also Read: WHAT TO EXPECT FROM INDIA-WEST INDIES SERIES?