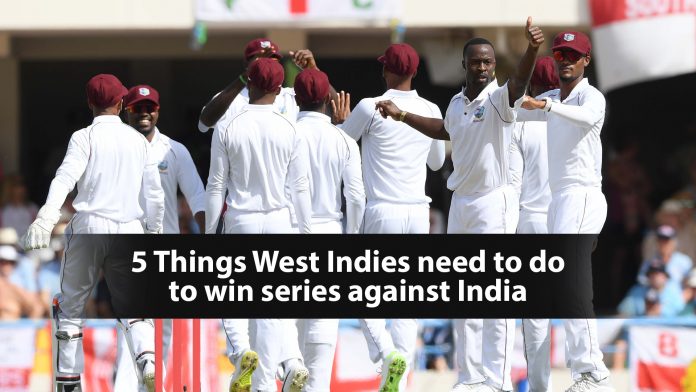 After a horrific defeat in T20 and One-Day International series, the host-West Indies are all set to take on India for a two-match Test series which is scheduled to start at North Sound in Antigua. India, on the other hand, on paper, a batting line-up that has Kohli, Cheteshwar Pujara, KL Rahul, Rohit Sharma and Rishabh Pant in the ranks should be termed clear favourites but this West Indies team, led by Jason Holder, is no pushover. A win in the opening Test will be the 27th for Kohli as skipper and will put him on even keel with his predecessor MS Dhoni. A century in the game (19th as captain) will place him on par with Ricky Ponting. With this, MyTeam11 brings to you 5 things West Indies need to do to win Test series against confident India:

Strategic Bowling against 3 Pillars of India

The Caribbean giants need to be well-prepared against the three pillars of the Indian Test team, Cheteshwar Pujara, Ajinkya Rahane & Virat Kohli. Accounting to India’s glorious victory in Australia against the hosts, Cheteshwar Pujara stands as a big threat to Windies. Pulling off 2 consecutive centuries in the last 2 ODIs against West Indies, Virat Kohli is up for any challenge & bag the victory title.

Attentive Play Rather Than Aggressive Play

Looking back the T20Is and ODIs performance of the Windies, it seems they were playing more aggressively than attentively which led to a rapid fall of wickets, fewer runs on the scoreboard and whitewash in both the series. The longer format of the game requires the team to stay put, bat efficiently, and avoid losses due to aggressive playing. A calm and composed performance will help the Holder & team to spend more time on the field.

Another benefit that West Indies can have over India is targeting the not so experienced batting line-up, i.e., Mayank, Rishabh, and Rohit. Rohit Sharma, who is the King of ODIs, but has a loose hand when it comes to Tests, shall help West Indies conquer the game with ease. On the other hand, Pant, who is known for often miscuing the shots & throwing up his wickets, and Mayank who is not a regular Team India inclusion are other loopholes of India’s batting line-up that the Windies bowlers can take advantage of.

Jason Holder needs to contribute with the bat

Jason Holder, the West Indies skipper and the best Tests All-rounder as per the ICC player ranking, should contribute more with the bat so as to help his team achieve a respectful and defendable total against the best Test team of present times. Holder knocking off some respectable shots, helping the team put up a big score on the board & limiting India’s batting by targeting the loopholes will certainly lead the hosts toward victory.

With the series being organized in the West Indies, it becomes a plus point for the hosts as they are well-aware of the home conditions. Thus, winning more sessions by taking full advantage of the home conditions, West Indies can still stay in the game. Apart from this, making use of R Cornwall’s exceptional all-rounder skills along with Shai Hope and Darren Bravo’s miscellaneous playing techniques strategically will put up West Indies’ winning chances on a higher note.