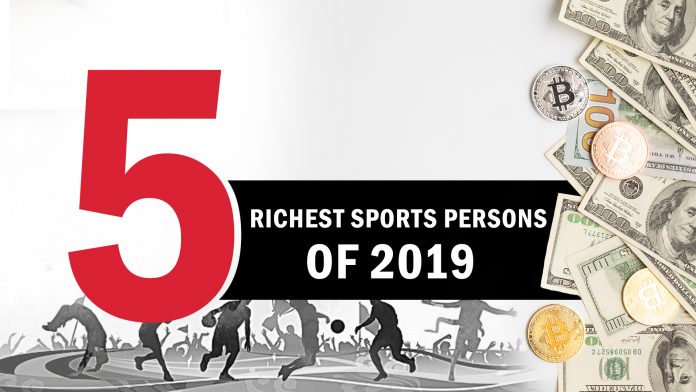 We Indians believe in the phrase “Padhoge likhoge banoge nawab, Kheloge Koodoge hoge bekar” but how much it justifies seeing the current scenario. Today an ordinary sports person earns a lot more than an engineer, doctor or journalist. This does not mean that engineers, doctors are not receiving good, the crux is it all depends on hard work and dedication of an individual towards their work.

Recently, Forbes released the list of richest sports personalities of 2019 and Indian cricketer, Virat Kohli was the only Indian to get the place in that list. MyTeam11 brings you the top five richest Sports person of 2019 in the Forbes list:

Argentina born professional footballer, Lionel Messi has led the Forbes list of world's highest-paid athletes for the first time this year. According to the Forbes 2019 list, Lionel Messi is estimated to earn $92m from salary and winnings and $35m from endorsements which makes total earnings of $127m. Regarded as GOAT, Messi plays has won five Ballon d'Or awards. A belligerent Barcelona player, Messi holds the records for most number of goals in La Liga (419).

Portuguese football star Cristiano Ronaldo has total estimated earnings of $109m. To be more precise, $65m of the total amount comes from salary and winnings and rest $44 he earns from endorsements. Almost every football fan knows the Ronaldo power, his abilities, and physical strength. He led his Portugal side to win the 2016 European Championship. Meanwhile with Real Madrid, Ronaldo won 15 trophies, including two La Liga titles and is the only footballer to reach 30 goals in six consecutive La Liga seasons.

Neymar commonly known as Neymar Jr., is a Brazilian professional footballer who plays in forward position for national side. In the last 12 months he has total estimated earnings of $105m ($75m from salary and earnings, $30m from endorsements). He is the third footballer in the list, and his records and achievements are not far away from the above two. Neymar is the third-highest goalscorer for Brazil with 61 goals in 99 matches.

Mexican Professional boxer, Canelo Alvarez is the fourth richest Sports person of 2019. He has estimated earnings of $94m. Out of this, from endorsements he earns only $2m and rest $92m are his salary and winning amount. Being a boxing star, it’s a moment of pride for him to see his name among the greats. Among all the sports personalities in the list, he is the only one whose earnings from Endorsements is not high.

Born and bought up in Switzerland, Tennis great Roger Federer is the fifth richest on the list with a huge $86m coming from endorsements and $7.4m coming from salary and earnings. His achievements justify his place in the list, he has held number one rank Association of Tennis Professionals (ATP) rankings for consecutive 310 weeks, which itself is a huge record. Other than this Federer has won a record eight Wimbledon titles, six Australian Open titles, five US Open titles (all consecutive, a record), and one French Open title.