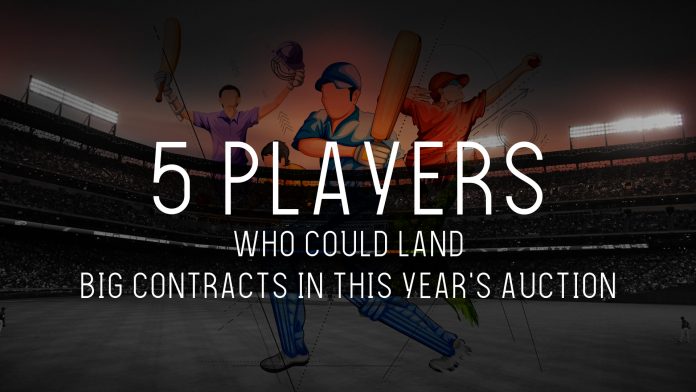 The stage is set for the auction of World’s biggest T20 tournament in the city of joy Kolkata. The Indian T-20 Leagues teams have probably figured out the changes and the players they would want to make in their line ups for the upcoming season. The franchises will be looking to get the right combination of uncapped players and foreign players since there are just a few overseas slots allotted to each of them. Franchises would have monitored the performances of each player in the domestic and international tournaments and will be ready to spend big. Overseas players like Aaron Finch, Dawid Malan, will surely be in franchisees’ radar. Chris Lynn, who performed exceptionally well in the recently concluded T-10 Carnival will also be the centre of attraction in the auction.

Last year, the teams spent heavily on overseas talent. With only just four foreign players allowed in the playing XI, franchises might go for young domestic stars in this year’s auction. Players like Priyam Garg and Dhrumil Matkar performed well in the domestic circuit and might cause bidding war between franchises.

With few weeks left ahead of the auction, here’s a list of five players who can get a big fat deal in the upcoming Indian T20 League 2020 auction.

Mumbai's Yashasvi Jaiswal will be the hottest property in the upcoming auction. The frequent headliner in the under-19 cricket, Jaiswal was the highest run-scorer for Mumbai in recently concluded Vijay Hazare Trophy. The 17-year-old made 564 runs at an average of 112.80 with three hundred and a fifty. The all-rounder became the youngest player to smash a List A double-century. His blazing form helped Indian Under-19 side to lift the under-19 Asia Cup 2018. The Mumbai boy surely will be in the Radar of every Indian T20 League team.

The England all-rounder was bought by KXIP for a whopping price of 7.2 crores and the Englishman performed decently in his debut season. Curran took a famous hat-trick in his second match, against Delhi Capitals and showed his talent with the bat as well. KXIP tried him as an opener, but that experiment didn’t pan out well. His release before the auction came as a shock to many cricket fans, but KXIP’s loss might be other franchise’s gain as they will be looking to get the all-rounder in their squad.

Cummins will be one of the biggest attractions in the auction in the bowler’s category. Australia’s speedster is amongst the high-profile names in the highest base price list of Rs 2 crore. He has been Australia’s best bowler over the last few years. Cummins made his Indian T20 League debut in 2014 playing for KKR, but consistent injuries kept him out of the squad. Delhi Capitals then bought Pat in 2017, and the bowler played 12 matches for them. In 2018 he was bought by MI, but again a back injury prevented him from taking part in that season, and he was subsequently released. Cummins is back in the auction pool. His recent form with the ball will attract quite a few teams.

The World Cup-winning captain, Eoin Morgan could tempt a bidding war between the franchises. Eoin Morgan is currently at his prime form in the white-ball cricket. The southpaw was at his destructive best in the recently concluded T20I series against Blackcaps as well. Eoin finished as the second-highest run-scorer in that series. His leadership skills could be handy for a team like KXIP. The aggressive left-hander was previously with SRH but was released in 2018. His red-hot form would undoubtedly put him on top of the table for buyers.

Periyasamy rose to fame with his exceptional performance in the TNPL 2019. The right-arm pacer’s brilliant five-wicket haul helped his side Chepauk Super Gillies to lift their second title of TNPL. Ganeshan bagged a total of 21 wickets in 9 matches, which is the highest for any bowler in the 4-year history of TNPL. With his slingy Lasith Malinga-like action and his toe crushing Yorkers, Periyasamy could be an exciting prospect in the upcoming auction. Teams like KXIP and RCB who have struggled with their death bowling in the past would surely look to get their hands on him.