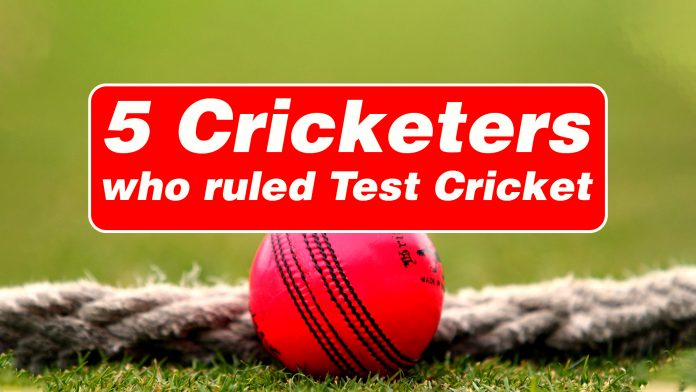 Cricket nowadays is played in every part of the world whether it’s a T20 game, ODI or five-day game. But, it is said that Test cricket is the purest form of cricket because it tests a player’s potential, skills, and patience. Every cricketer dreams to wear white jersey at least once in his career. From Don Bradman to Steve Smith, Test cricket have produced many legends that have ruled in the format.

MyTeam11 brings to you to five players whose performances raised the flag of their nation wherever they played:

Sir Donald Bradman is the leader of batting in Test Cricket. He averaged 99.94 in his longest format career that spanned for very less time. Being regarded as the greatest batsman of all time, his achievements in Test cricket still gets the top spot in the record books. In his 52 Test appearances for Australia, Bradman has scored 6996 runs with the help of 29 centuries and 13 half-centuries. Interestingly, he is the only player in cricket history whose century numbers are far more than half-centuries.

The former Australian batsman scored 974 runs in one series which is still the best in the history of the game. Steve Smith inched closer to this in Ashes 2019 but didn’t manage to reach that magical figure.

‘The Unsung Hero’ of Indian cricket, Rahul Dravid has never got that respect which he deserved. His decency and determination made him different from other players. In India’s tour of England in 2011, Dravid emerged as the lone man for India. The team lost the series terribly by 4-0, but Dravid’s performance gave Indian fans something to enjoy for.

Known for his sound batting technique, Rahul has played 16 years and gave his best everywhere. In 164 Test matches for India, he scored 13,288 runs at an average of 52.31 that include 36 centuries and 63 half-centuries. Although he is far behind Master Blasters’ Test record but sometimes in sports, you have to leave all the stats and records to judge a player.

His partnership with Laxman at Eden Gardens and double century at Adelaide are still in the mind of entire cricket fraternity. In 2000, Dravid was one of the five cricketers selected as Wisden Cricketer of the Year while in 2013, he bagged India’s third highest civilian award, Padma Bhushan.

ALSO READ: LEADING PAKISTAN IN FRONT OF HOME CROWD A HIGHLIGHT OF MY CAREER

Jacques Kallis is perhaps the most successful all-rounder not only for South Africa but in the World. Moreover, after Sachin Tendulkar, he is second highest century scorer of Test cricket (45). Kallis played 166 Test matches and had a batting average of approximately 55.37. He scored truckloads of runs in these matches, 13,289.

The former South African all-rounder had been at the top of the ICC rankings long period. He was named as the Leading Cricketer of the World in 2008 edition of Wisden for his performances in 2007. Moreover, the prolific player also won the "ICC Test Player of the Year" in 2005.

J. Kallis is also one of the few players who scored a century in their last Test match. Playing against India at Durban in December 2013, he scored his 45th Test century.

Cricket is not only the batsman game; it has produced some of the greatest bowler who ruled the game with their magical balls. Sri Lankan legendary spinner, Muttiah Muralitharan is one of them who is still the leading wicket-taker in the longest format of the game. He took 800 wickets in his 18-year career from 1992-2010.

Being one of the most successful bowlers the game has ever produced, Muralitharan retained the number one spot in ICC player’s rankings for the record 1711 days. He became the highest wicket-taker in Test in 2007 when he surpassed Aussie legend, Shane Warne.

Awards and appreciation come to those who dare to do what they dream. The Sri Lankan legend, Murali proved this right after he became the first Sri Lanka to be inducted in ICC Hall of Fame in 2017. Apart from this, he was also selected as the Wisden leading cricketer of the World twice in the year 2000 and 2006.

If one has to name the bowler with impressive bowling action, then most of the people will answer Dale Steyn. Although, he retired from Test cricket this year only, but his action and ability to bowl inswingers and outswingers at the pace above 140 Km/hr is still regarded as the best.

Steyn has taken 422 wickets in his 14-year career from 2004-2018. He is the leading Test wicket-takers for South Africa. Besides this the belligerent right-arm pacer dominated the number one spot in the ICC Test rankings for a record 263 weeks between 2008 and 2014. This period can also be named as the ‘Golden Period of his career.’

He has been honored as the ICC Test player of the year in 2008 and included in ICC’s Test team of the year for seven consecutive years from 2008 to 2014.