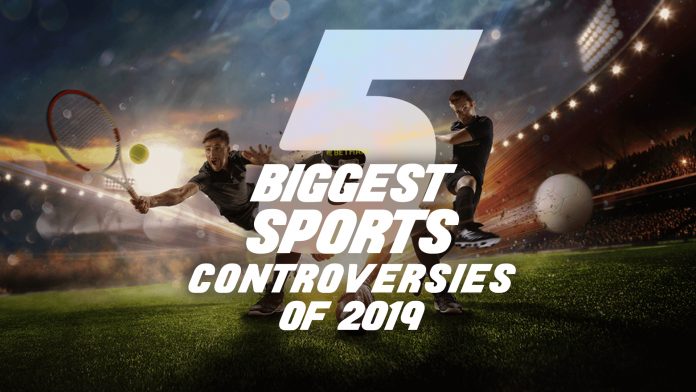 Sports and controversies go hand in hand. Everyone talks about fair play in sports, but where there are diverse players of different demeanours, small fights and big scandals are imminent to take place. MyTeam11 has compiled a list of the controversies that grabbed headlines of every newspaper, and TV channel and evoked outrage on social media.

Hardik Pandya and KL Rahul’s appearance on ‘Koffee With Karan’

The two most promising youngsters of Indian cricket team, Hardik Pandya and KL Rahul, appeared on the popular chat show, ‘Koffee With Karan.’ When the host is Karan Johar, it takes hardly a second for the celebs to let the cat of the bag. But what Pandya and Rahul did was more them just spilling the beans.

Pandya shared his personal views on hook-ups and relationships with multiple women. But little did he know that his fun-filled banter was no longer fun and offended the audience. His inappropriate comments on women were perceived as misogynistic, forcing him to apologise for the same later.

In the 12th edition of the Indian T20 League, R Ashwin’s mankading act was the highlight and caught eyeballs worldwide. The blockbuster league got embroiled in controversy when Punjab team captain Ashwin mankaded Rajasthan's opener Jos Buttler and dislodged the bails on the non-striker's end of the wicket.   Jos was run out as he was stepped out of the crease before ball was delivered.

Buttler's dismissal gathered divided opinions. While some labelled Ashwin's act as disgraceful, others felt that he was right in doing so because mankading is considered a legitimate way of dismissing a batsman in the cricket rule books.

US Women's Soccer Team stood up for pay equity

US soccer team initiated a battle that is transcending sports field. Gender pay disparity is one issue that has always been prevalent in sports arena but no one was bothered to raise his/her voice and bring the issue into everyone’s notice.

But the 28 members of the world champion United States women’s soccer team took their fight for pay equity forward and sued the US Soccer Federation over gender discrimination and working conditions. Filing this lawsuit brought pay gap between the men’s and women’s national teams to light, highlighting the fact that inequality affects not only their pay scale, but their travel, playing schedule, training, medical treatment as well.

Facing the aftermath of Pulwama attack in which nearly 40 CRPF personnel were killed, Pakistani shooters were refrained from participating the season-opening International Shooting World Cup conducted in the capital of India, Delhi. The ambiguity of granting visas to the Pakistani players continued because top officials claimed that the rifle association did not receive confirmation about the Pakistan shooters participation. As a result, no visa was issued to the respective shooters.

After clinching victory in the national college football championship, the Clemson football team was graciously invited to visit the White House by US President Donald Trump. The champions expected to be greeted with a lavish meal, but they received was a smorgasbord of fast food. It was shocking to see the team being served with burgers, pizza, and fries, at a venue, which is known to host formal dinners for ambassadors and heads of State.

In his defence, Trump blamed partial government shutdown for this strange choice of buffet, as the White House kitchen was not operating then. People trolled Trump for lying and called his act a display of racism and classism, disrespecting the athletes.