4 Dressing Room Incidents that Might Just Spice up your Day 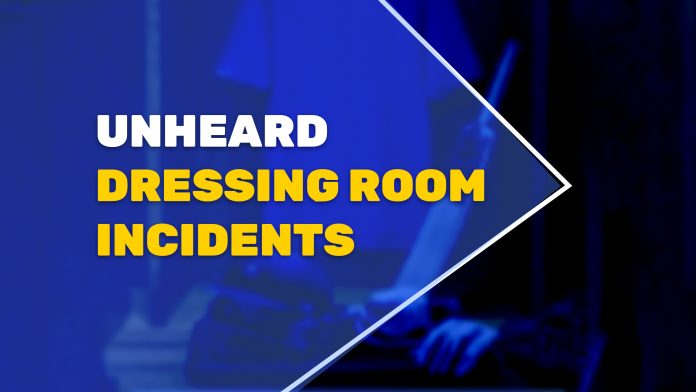 Cricket is known as the Game of Gentlemen, but we all know that the players are not so gentle often. We have seen Virat Kohli getting aggressive on the field, Andrew Symonds and Harbhajan Singh getting involved in an ugly verbal spat leading to the famous Monkey gate incident. Well, the tale just doesn’t end here, and the list is quite long.

We have come up with some interesting dressing room stories that you must’ve never heard of. Player’s on the field performance has always been the talk of the town but what happens behind the closed doors always remain unknown to the fans. So, just to spice things up, we bring you some stories that have only been heard by the walls of the Indian dressing rooms other than the players present there. Read on:

Sourav Ganguly and his Resignation

In the news for his current achievement of all set to become the next BCCI president, Dada has had his share of difficulties, pressure, love and even hatred. Things got so messed up once that Sourav Ganguly was on the verge of resigning from his post of Indian National team’s captain.

Well, Yuvraj Singh, the biggest prankster of all the times in the national team, didn’t spare Sourav even. The entire players of Indian cricket team along with Yuvraj Singh printed a fake copy of Sourav Ganguly's interview where he was shown as criticizing the Men in Blue. Seeing the players standing against him and all hurt by the fake interview (which Sourav thought to be actual) he offered to resign and swore never to have said anything against the team. It was not long before Yuvraj and his partner-in-crime Harbhajan understood the gravity of the situation & revealed the truth to Ganguly only to be chased out of the dressing room by him with a bat in his hand.

Also Read: SOURAV GANGULY SET TO TAKE OVER AS THE NEW BCCI PRESIDENT

No matter what may come, I will be upright to lead my team to victory; we believe this has been Sachin’s winning mantra at various places. Well, after all, who gets to the pitch with a bad stomach?

During the 2003 ICC World Cup, India had a face-off with Sri Lanka, and Sachin ended up having a bad stomach and feeling dehydrated on the eve. In order to recover from the situation, he tried adding a teaspoon of salt to his energy drinks that only made things worse. Things got so bad that the player had to stuff tissues in his underpants and escalate to the dressing room in one of the drinks breaks.

Virender Sehwag has always been high on the spirit when it comes to playing on the field. His storming shots have always been in the news for two reasons, one for helping India gain bigger scores and second for getting Sehwag out. Yes, Sehwag’s free-styling often left him paying for his shots by going back to the pavilion.

In one of the crucial matches where India was dependent on a good opening partnership, Sehwag played a loose shot giving up his wicket. Seeing that John Wright, India’s then-coach declared “If that guy gets out to one more bad shot I'm going to really have a go at him," which was conveyed to Sehwag as well. However, unbothered by the ultimatum Sehwag ended up giving his wicket playing similar shot in the next match as well. This enraged Wright, who in turn held Sehwag by his collar as soon as he entered the dressing room and blasted at him, quite true to his words.

Well, things didn’t escalate further as Sehwag took the bashing in the right manner and worked on his playing skills.

We as Indian have a born tendency of being highly superstitious, and these players are no exception. But superstitious beliefs coming from the Master Blaster, Sachin Tendulkar often raises eye-brows as he believed in capabilities more than luck or superstitions.

It was during the year 2006 when India was playing 3rd ODI against Pakistan chasing a target of 289 when Sachin got out with a total of 95 runs. After returning to the dressing room, the player went for a shower, and Harbhajan Singh was providing him match insights, telling him about the impressive performance of Dhoni and Yuvraj Singh. Sachin assumed his staying in the shower to be a positive sign for team India’s victory and decided to stay there only till the match ended. Well, it ended with India becoming victorious and Sachin taking a 40-minute long shower.

These were some of the stories that we found quite amusing and quite shocking. We hope you enjoyed every bit of these stories. Stay tuned to Myteam11 as we come up with latest sports stuff, predictions, match reports and stories that will just lighten up your mood.