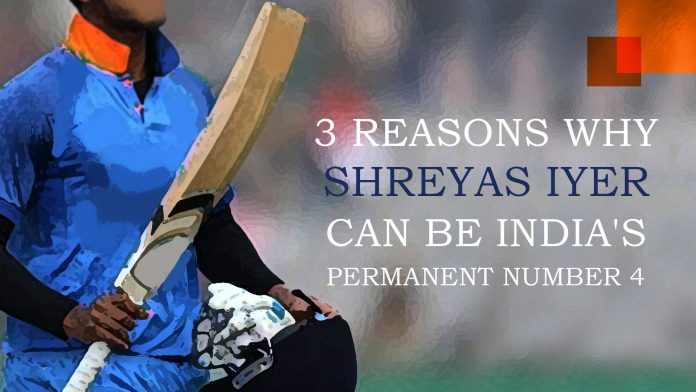 India’s number four conundrum started after the 2015 world cup, the debate resurfaced before the 2019 world cup and plagued them after the appalling exit from the semi-final, but it seems Virat and co. have finally solved the number four mystery before the 2020 T-20 World Cup. Shreyas Iyer has done exceptionally well as number four since his inclusion in the squad. Indian selectors have given him consistent opportunities since the World Cup, and the 24-year-old Mumbai batsman hasn’t disappointed.

Before Shreyas, India tried numerous players at the number four spot in the lead up to the 50-over World Cup, but none of them could perform. Experiment with Vijay Shankar during the World Cup didn’t give them fruitful results as well. India persistence with Pant at No. 4 in white-ball cricket didn’t work out either. In 7 outings, Pant managed to cross 20 just once. His poor shot selection and cheap dismissals forced the team management to look for another option.

So why Shreyas is being considered the perfect man to bat at number four? We have answers:

India needed someone at number 4 who could see out the tough phase, especially if the big three falls early. Shreyas Iyer’s performance in the series against West Indies proved that he is more than capable of building the innings in crucial stages. Virat Kohli found strong support from Iyer. Shreyas added partnerships of 125 and 120 with his skipper. After India won the ODI series, Kohli applauded Iyer's contribution and said that he was impressed by Iyer's batting and attitude. With reliable technique and temperament, Iyer is the best suitor for number four.

Shreyas Iyer not only can bat patiently but can also play an attacking innings at the death. He uses his feet to almost perfection against the spinners with no fear. In the recently concluded T20I series against Bangladesh, Iyer scored 108 runs at a strike rate of 183.05. Iyer finished with the highest strike-rate amongst batsmen from both sides in the series. He has shown time and again he can build the innings while maintaining a healthy strike rate as well.

Shreyas grinded himself in the domestic cricket before getting an opportunity in the ODIs. After the poor display by Pant in white ball, Iyer grabbed the golden opportunity with both hands. He has scored four half-centuries in the seven ODI innings he has played thus far at an average of 49.00. He had adapted to the game situation very well and definitely has earned his place in the squad.