3 Reasons why Baseball can do well in India 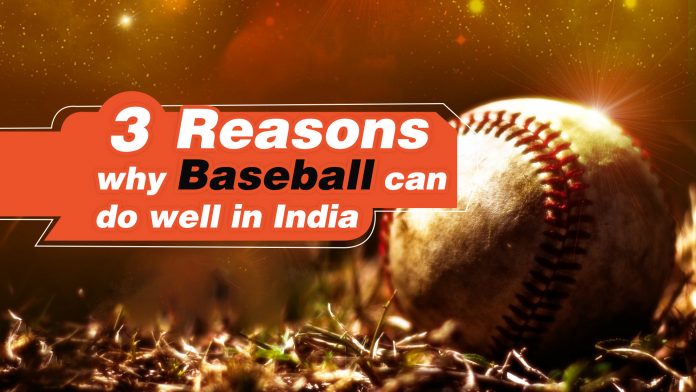 Indians and their never-ending love for cricket is slowly and slowly giving space to other sports too. Be it kabaddi, basketball or per se Baseball, people in India are adopting changes in their sports preferences with open arms. People are experimenting with their choices, and the experiences yielded from these experiences are accepting a wide appreciation from the fans. Thus, foreign sports bodies are looking at India as a potential marketplace for growth.

Baseball, believed to be quite similar to cricket, courtesy the use of a bat, ball, running and scoring methodology, is actually indifferent to cricket. However, the differences are assumed to play a pivotal role in promoting the game amongst the Indian audience. Here are 3 reasons why Baseball can find itself a separate place in the Indian sports market, despite the ever since presence of cricket.

Also Read: 3 REASONS WHY ZIMBABWE DESERVES TO MAKE A COMEBACK

Indians & their Love for Cricket

Cricket has always been the most-loved and most-watched sport in India, despite Hockey being the national game. From gully cricket to cricket as a profession, the game has been an integral part of every Indian’s life. Talking about baseball, the game shares a similar concept as of cricket, as it also comprises of a bat, pitch, ball, and players. Offering the same excitement as of cricket, people in India will be easily able to connect with Baseball that can give affect the growth and popularity of the game on a positive note.

Big leagues and tournaments play a crucial role in promoting the game amongst the people of a potential business market. The most popular baseball league, “Major League Baseball (MLB)” is expanding its expertise area to India. Setting up a foot in India, the US-based baseball organization will be working on exploring the potential growth of Baseball in India.

The organization will focus on unveiling the possible opportunities, for people playing Baseball, of ending up with government jobs or recognition of international level. Also, being one of the most popular professional baseball organizations, MLB’s homecoming will lure more and more people to try their hands on the game.

The major promoter for anything in the market is its marketing and promotional strategies that help in hitting at the right target audience. There are various bodies and organizations that are exploring the possible growth of Baseball in India. The reports are that MLB will focus on promoting the game at the grass-root level initially, making the majority of the Indian population accustomed to the game, before hitting the concept of hosting matches in India.

The ideology of connecting people on the grass-root level will help, Baseball organizations develop a place for the sport in the hearts of Indians who will then feel more connected towards the game before watching it on big screens or stadiums.

Baseball has been in India for two or three decades now and paired with the right technologies; we believe that the sport is all set to make it big in the coming years. Do you imagine yourself sitting in a stadium to watch a baseball game? Let us know in the comments below what is your take on the increasing popularity of Baseball in India?