3 Players who will be seen closely by management 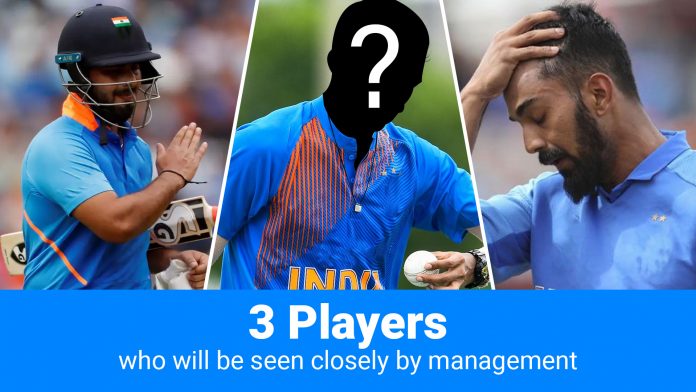 With T20 World Cup round the corner, team management of all the sides is keeping a close check on every player’s performance to get the best 15-member squad for the mega event that will start from October 18, 2020. Virat Kohli-led side will be one of the favorites to lift the coveted trophy for the second time as the team is full of talent with likes of Rohit Sharma, Hardik Pandya, Ravindra Jadeja.

Before the seventh edition of T20 World Cup now every single T20 International will count for Indians in the field. Within ten days, Indian team will play three-match T20 series against the Proteas where some players fate will be on their performance.

MyTeam11 brings you to three Indian players who will under inspection.

The 21-year-old left-hand batsman, Rishabh Pant is becoming a key player for the Indian team in all three formats of the game. Although, he has been named as the first wicket-keeper choice for side, still the young batsman lacks maturity in his batting whether we talk about his World Cup 2019 semifinal dismissal or recent West Indies vs. India series performance. The Indian team management will have an eye on him in India vs. South Africa Test series because the way he was getting dismissed that was creating all the frustration.

The management will be looking at how he handles tough situations, able to convert his starts or not. Apart from this at times when the team needs him to play sensibly, he throws his wicket away. So, he has to take care of all these things now.

For KL Rahul, the situation is like Now or Never. In the recently concluded West Indies vs. India three-match T20 series, he got only one opportunity where he only managed to score only 20 runs. With some star players in the squad, KL Rahul will be under extreme pressure to get back to his form. Now, the time is running very fast for him; if he fails to utilize the chance this time, there’s every possibility that the team management might not consider him anymore.

With the presence of Rohit Sharma and Shikhar Dhawan in the squad, he will not get chance to open the innings until any injury happens to any of these players. No doubt, KL Rahul is god-gifted stroke maker, but at last his performance will decide his fortunes.

From earning 200 per match to representing India, Navdeep Saini’s journey has been remarkable till now. The 26-year-old Haryana born pacer, Navdeep Saini picked up four-wicket in the first T20I played been West Indies and India in Florida. The entire cricket fraternity hailed the speedster for his performance. But the actual test will start from September 15, when India will play South Africa. The selectors will have a close eye on him as he might prove beneficial for India in the 2020 T20 World Cup that will be played in Australia.

He is one of the few bowlers who can bowl at the speed of 150 km/h, and Australian tracks offer extra bounce to pace bowlers, and he can be a huge advantage for Indian team. But, before that he has to deliver his best in the T20 series against South Africa to strengthen his T20 World Cup chance.