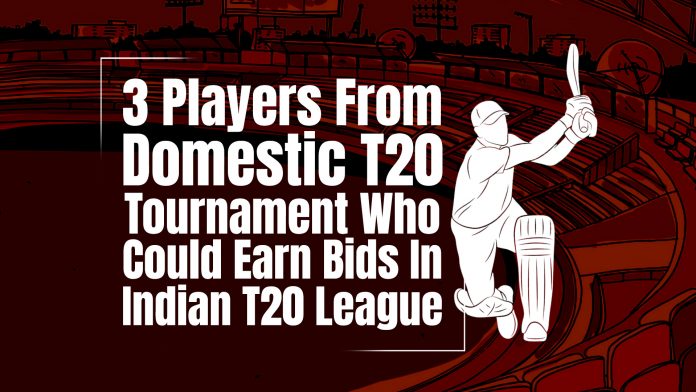 The domestic T20 tournament has come to a successful end with Karnataka beating their neighbour Tamil Nadu and emerging as champions for the second time. The City of Joy, Kolkata, is all geared up to host the upcoming mega auction of the Indian T20 League 2020. These auctions don’t just offer a platform for the players to showcase their talent, but give a career-changing opportunity to build a unique reputation for themselves in the cricketing world.

Let’s find out which young guns, who performed exceedingly well in the domestic T20 tournament, have caught the eyes of the scouts and could make a place for themselves in the next edition of the Indian T20 League.

The young sensation Devdutt from Karnataka team is currently in his best form. He displayed an exemplary performance with his astonishing hitting and consistency. He emerged as the leading run-scorer of the tournament with an unbelievable 580 runs from just 12 innings at an average of 64.4, and a strike rate of 175.8, which is the highest of the tournament. He has hit 59 fours and 33 sixes in total. His impeccable talent and ability to finish matches could help him emerge as the top buys and open doors for him from the teams like Royal Challengers Bengalore.

The leading wicket-keeper of the tournament has made a name for himself as the most economical bowler of the tournament. Ravisrinivasan Sai Kishore took a total of 20 wickets from just 12 innings at an average of 13.4. He could be one of the best players to watch out for the auction, as he has mastered the hard lengths and variation of pace needed in the powerplay. He has the potential to bamboozle the batsmen easily. It would not be a surprise if the franchises on the lookout for spinners pick 23-year-old Sai as their first choice to ramp-up their spin arsenal.

The 25-year-old Periyaswamy is one of the budding players who could attract lavish bids from the franchises. His slingy bowling action resembles that of Sri Lankan pacer Lasith Malinga. He has the capability to choke even well-renowned batmen with his toe-crushing yorkers and cutters. His success in cricket is remarkable, considering the fact that he is partially blind in his right eye since birth.