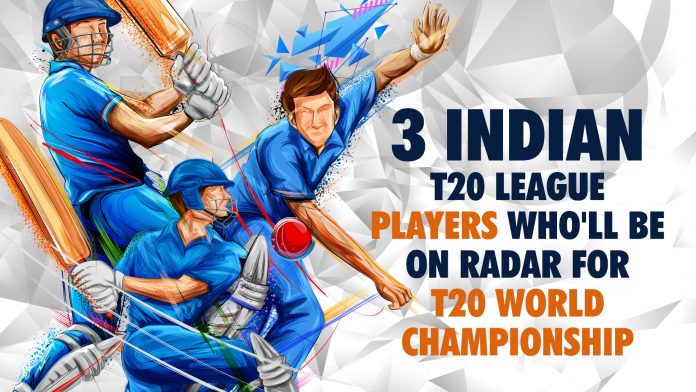 After the gripping and consuming 50 overs World Cup, all the teams have started their preparation for cricket’s next gala event; the T20 World Cup. India has already begun their try-outs for Down Under. The Men in Blue are focussed on getting the combinations right in the lead up to the T20 World Cup in Australia next October. Virat and Co. have 11 scheduled T20Is before the pinnacle event, and they will be looking to test out different combinations to build a tenacious squad. Although India has almost a settled unit, they will continue to audition for the opener and middle-order spot. Apart from the international schedule, Indian players will get one more chance to prove their mettle in the INDIAN T20 LEAGUE as well. The performances in the INDIAN T20 LEAGUE will surely attract the attention of Indian selectors.

Here is the list of 3 Indian T20 League players who can knock the Indian team door ahead of the T20 World Cup.

Sanju Samson came into the limelight eight years ago. He elicited widespread praise for his batting stint in the domestic T20 tournament. His easy on the eyes shorts earned him a reputation of a stylish batsman. In Indian T20 LEAGUE, Sanju averages over 27 with the strike rate of over 130.

The Kerala Wicketkeeper-batsman recently grabbed the headlines with 212 runs knock off just 129 deliveries against Goa in a List A match. The knock earned up a call in Bangladesh T20I series, but the youngster failed to find a place in the playing eleven. Although the 25-year-old has been recalled as a replacement for the injured Shikhar Dhawan for the T20I series against West Indies, it is yet to be seen if he will find a place in the playing eleven.

Pant will undoubtedly be the first choice wicket-keeper, but if Sanju Samson succeeds to prove his mettle in the upcoming Indian T20 League, he could find a ticket for the flight to Australia.

Besides Samson, another individual who would like to cement his place in Men in Blue’s T20 squad with solid performances is Shubman Gill. Ever since he made his debut in domestic cricket, the Punjab batsman has been deemed as the next Virat Kohli.

The Punjab boy made a strong case for a permanent locker in the Indian team when he stroked a double century against the Windies A in a first-class game. His performance in the domestic circuit earned him a national call-up for the Test side.

Earlier this year, Gill had an exceptional INDIAN T20 LEAGUE 2019 for KKR and showed great temperament crucial stages. After getting a consistent run at the top by the KKR, Gill started to back up his undeniable talent with knocks of high quality. The youngster scored four fifties as an opener for KKR in 2019. If he succeeds in replicating his excellent form in the upcoming Indian T20 League, Gill would surely give Shikhar Dhawan a tough fight for the opening spot.

The Jharkhand boy rose to fame when he led India to the final of the 2016 U19 World Cup. The young wicket-keeper has got immaculate skills of smashing the ball right from the word go.

The left-handed batsman is one of the few Indian batsmen who have scored consecutive centuries in the domestic T20 tournament. Kishan has an impressive Indian T20 League record for the MI. He has played 70 T20s for them thus far where he has scored 1628 runs at a strike-rate of 130.86.

The youngster will undoubtedly get more opportunities in the upcoming Indian T20 League, and his good outings in the field could pose a serious threat to Rishabh Pants place in the T-20 World Cup.