3 Indian Players to watch out against Bangladesh 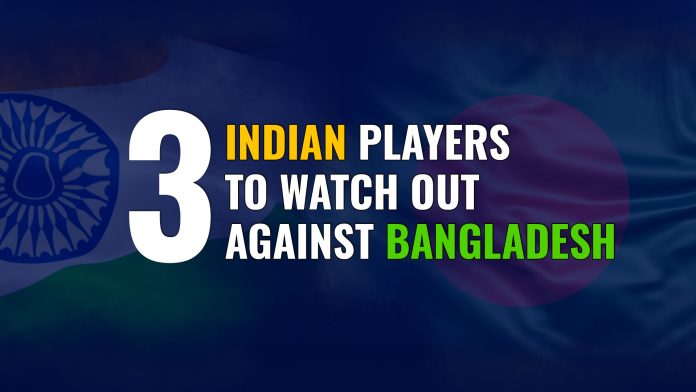 After the recently concluded T20I series between India and Bangladesh, All eyes are focused on the upcoming Test series starting from 14th November. India, having won the T20I series, will be looking to dominate in the tests as well. With the return of captain Virat Kohli, India will be confident of winning their 12th consecutive Test series at home. Team India have got off to a terrific start in World Test Championships with five wins out of five games. The World No.1 Test side recently pulled off a historic whitewash against South Africa at home to take their points tally to 240.

Bangladesh, on the other side, have been in poor form in 2019, losing all three matches played, including the last one against Afghanistan in September. They will be searching for their first win against the hosts. After the Shakib fiasco, Bangladesh will be hoping to perform well under their new test captain Mominul Haque. It will be interesting to see the temperament of the young Bangladesh side against the mighty Team India.

Bangladesh needs to make some tactical plans against some specific players if they are to hold firm against this formidable Indian side. We have listed down three Indian Players that Bangladesh have to lookout.

Mayank finished as the second-highest runs-scorer with his rally of 340 runs at an average of 85 in the last test series against South Africa. Mayank, who scored his maiden double hundred in the previous series, is in scintillating form and will be looking to carry it forward.

The player of the series against South Africa , Rohit Sharma’s debut as a Test opener couldn’t have been any better. He showed his authority by smashing three centuries in the three matches. His tally of 529 runs from 4 innings at an average of 132.25 is the most in an India vs South Africa Test series; surpassing Jacques Kallis’s tally of 498 runs.

He will the key batsman against the young Bangladesh side.

India’s premier off-spinner Ravichandran Ashwin who became the joint fastest to take 350 wickets during the South Africa series will be the key player against Bangla Tigers. His home record in tests has been exceptional and he will be looking to exploit the weaknesses of inexperienced Bangladesh side.

The first test between India and Bangladesh starts from 14th November in Indore.