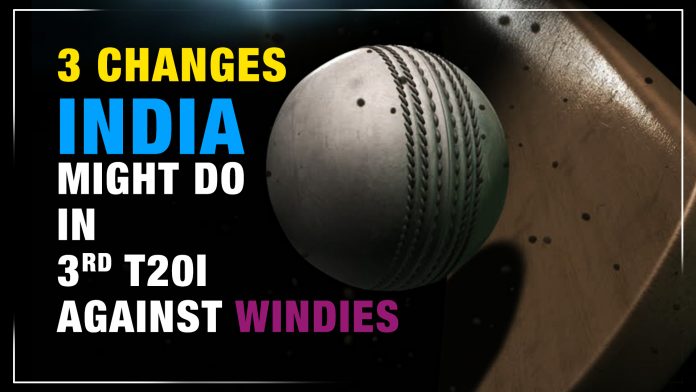 In the 2nd T20I match between India and West Indies, the visitors confronted the 'Men in Blue' with ease and attained a resounding victory, ending up with a head-to-head competition in the three-match T20I series. The moment West Indies won the toss and chose to field, India lost one-third of the match. India has lost seven out of fifteen T20 games when they have batted first, as statistics suggest.

Indian skipper Virat Kohli was not expecting such poor fielding from the team, as there were 3 catch drops and a couple of misfielding during the match. The final deciding match of the series is scheduled to take place on 11th December in Wankhede Stadium, Mumbai and India is looking forward to do some changes in their line-up to enhance their chances of winning and showcasing some brilliant performances.

Cricket is an intriguing sport as it requires well-thought-out strategies to win a match. For example, Virat mentioned in a conference post 2nd T20 match that Windies studied the pitch more accurately than India and this reflected in the bowling pattern of the West Indies players. Studying the pitch is vital and Indian bowlers must keep that in mind ahead of the third match.

Also Read: GRAEME SMITH TO TAKE OVER AS SOUTH AFRICA’S DIRECTOR OF CRICKET

Wankhede’s pitch is made up of red soil, and it gives swing bowlers fair assistance in early overs of the match. On the other hand, the pitch may not be as favourable for the spinners as for the fast bowlers. Basically, India should focus more on fast bowlers in the upcoming match.

As witnessed in the previous match that fielding was not up to the mark, Indian team must take serious action in this department. In fact captain Virat Kohli was so disappointed by his team’s sloppy fielding that he asserted in the post-match presentation ceremony, stating, "To be honest, WI bowled cutters and their change of pace did not help us. But if we field so poorly, no amount of runs will be enough.

Along with the average batting score, India was not able to perform well in fielding, except for the stunning catch that Virat Kohli took on the boundary. The Indian team needs to be more spontaneous while fielding and the players should look up to the captain for inspiration.

The experiment of sending Shivam Dube in place of Virat Kohli worked quite well in the last match. Dube showed a mature approach towards picking up good shots and made his first fifty in an international T20 match. Virat Kohli has been very successful in experimenting with the batting orders, but it would not be a smart decision to change the batting order in the decider match.